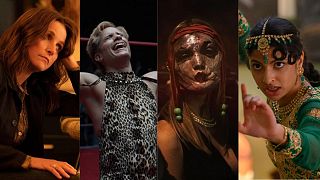 The Sundance Film Festival starts this week and gives us a first glimpse at what we can expect from the year in cinema   -   Copyright  Sundance Institute
By David Mouriquand  •  Updated: 19/01/2023

Kicking off today is the 2023 Sundance Film Festival, the largest independent film festival in the US, which gives us a first glimpse at what we can expect from the year in cinema.

Returning to an in-person edition – its first since 2020 – the Utah-based festival will offer up some of the titles you can expect to pop up on your end-of-year favourite lists. And considering last year’s Best Picture Oscar winner ended up being the Sundance-premiering film CODA, all eyes are on this 45th edition.

There’s something for everyone in this year’s 101 feature-length titles: tales of toxic dates, sci-fi horror dystopias, top notch documentaries, and Gael García Bernal as a flamboyant wrestler.

Before first-look reviews drop, here are some of the films premiering in Park City that should be on your radar for the rest of 2023.

Director William Oldroyd returns with another literary adaptation – following his remarkable 2016 take on Nikolai Leskov’s novella 'Lady Macbeth', otherwise known as “That movie that brought Florence Pugh into our lives”. His new film is based on Otessa Moshfegh’s pitch black novel about an ostracized prison secretary Eileen (Thomasin McKenzie) in the 1960s who forms a bond with a new employee (Anne Hathaway). A lovely tale of friendship as salvation? Think again, as some rather shocking revelations – which shall remain unspoiled here – threatens the budding camaraderie. It feels like a mix of Carol and Notes on a Scandal, and it’s one of this year’s buzziest titles.

We already flagged up Brandon Cronenberg’s eagerly anticipated follow-up to the excellent 2020 bodyhorror thriller Possessor in our Most Anticipated Films of 2023. Infinity Pool is a sci-fi thriller which follows a wealthy couple on vacation at an island resort. A fatal accident, which will expose a dark subculture of hedonistic tourism, leaves them facing a zero-tolerance policy for crime: either be executed or, if you’re rich enough, create a double of yourself whose death you can watch. Starring Alexander Skarsgård, Cleopatra Coleman and the ever-wonderful Mia Goth, this looks like a disturbing and trippy ride, and one of the festival’s hottest tickets. It’s also heading to the Berlin Film Festival in February for its European premiere.

Sadly, Cat Person is not a belated prequel to Jacques Tourneur’s 1942 supernatural horror film Cat People. Thrillingly, however, it's Susanna Fogel's adaptation of Kristen Roupenian’s 2017 The New Yorker short story, which inspired countless articles and heated debates. It follows a college student (CODA ’s Emilia Jones) who begins dating an older man (Succession’s Nicholas Braun). Everything seems to go swimmingly…until it really doesn’t. The story hit a cultural nerve at the time and dealt with gender, consent, power dynamics and societal pressures. Expect this one to be this year’s most debated and controversial title.

Ukrainian director Roman Liubyi presents the truth of what happened to Malaysia Airlines Flight 17 from Amsterdam to Kuala Lumpur, which was shot down by Russian forces on 17 July 2014. All 298 people on board were killed. Liubyi’s documentary explores the reality of this attack, the evidence - including physical artifacts like the butterfly-shaped shrapnel found in the bodies of the pilots - and how this act of mass murder contained the seeds of the future we now live in. Stay tuned for our interview with the director of this hard-hitting doc.

The new film from Sundance veteran Ira Sachs (Keep the Lights On, Love Is Strange) sees Franz Rogowski and Ben Whishaw married to each other. Need more to get excited? Well, here’s the twist: Rogowski’s character begins an affair with a younger woman played by Adèle Exarchopoulos. This leads to Whishaw starting an extramarital affair of his own. It sounds like exactly the kind of complicated and character-driven fare we’ve come to expect (and love) from Ira Sachs.

This cryptic horror-tinged film from filmmaker Daina Reid focuses on a distressed fertility doctor played by Succession’s Sarah Snook. Her daughter receives a mystery present for her seventh birthday: a rabbit that somehow triggers unexpected mood swings and unearths some ghosts from the past. The next Repulsion (with bunnies)? We hope so. At the very least, this one feels like it could be the socially relevant thriller that promises to occupy the same space as Get Out, which premiered at Sundance in 2017. Excited yet?

Aspiring martial artist Ria Khan believes she must save her older sister, Lena, from her impending marriage. After enlisting the help of her friends, Ria attempts to pull off the most ambitious of all wedding heists in the name of independence and sisterhood. Directed Nida Manzoor, this British action comedy film starring Ritu Arya and Priya Kansara looks like it's going to be an absolute blast.

Playwright-turned-director Celine Song makes her debut with this A24 drama. Past Lives is a tale of two childhood friends who reconnect later in life, having been separated when one of their families emigrated from South Korea. Hae Sung (Teo Yoo) and Nora (Greta Lee) reconnect over social media and then in New York, where they confront notions of love, time and fate. This sounds like the thoughtfully romantic journey that could make Past Lives 2023’s main Sundance discovery. As well as the one that gives us eye-tingles and makes us pretend like we haven’t been sobbing through a large part of the runtime.

Let’s face it: 2023 will be Jonathan Major’s year. He’s the next big baddie in the Marvel Cinematic Universe (in Ant-Man and The Wasp: Quantumania, following his show-stealing turn in Disney+’s Loki) and is starring opposite Michael B. Jordan in Creed III. As if that wasn’t enough, 2023 will see him star in writer-director Elijah Bynum (Hot Summer Nights)’s Magazine Dreams, a character study of a bodybuilding star with anger issues that seems to faintly echo Darren Aronofsky’s The Wrestler. Expect this transformative turn to be all the talk of Park City and an early contender for Best Actor at the 2024 Oscars.

Trans artists and co-directors Zackary Drucker and Kristen Lovell will present what seems to be one of the unmissable documentaries at Sundance this year. It examines the history of Manhattan’s Meatpacking District through the eyes of transgender women of colour. A portrait of gentrification which gives a voice to the unheard and reveals a secret chapter of NYC history? Sign us up.

Documentarian Roger Ross Williams – the man behind Life, Animated, The Apollo, and first African American director to win an Oscar, for his short film Music by Prudence – makes his narrative feature debut with this based-on-a-true-story tale of a Mexican wrestler named Saúl (Gael García Bernal). Stuck in a professional rut, Saúl decides to create a campy character named Cassandro, “the Liberace of lucha libre”. His fortunes are about to change, but with success comes relationship complications… Inject this into our eyeballs now.

You Hurt My Feelings

Writer-director Nicole Holofcener (the director of Friends With Money, Enough Said and The Land of Steady Habits, as well as the writer of the brilliant 2018 comedy-drama Can You Ever Forgive Me?) reunites with her Enough Said star, Julia Louis-Dreyfus, for this A24 comedy. You Hurt My Feelings is about a writer (Louis-Dreyfus) who questions her life and career after overhearing her husband’s (Tobias Menzies) critical take on her follow-up to a bestselling memoir. As the title suggests, her feelings are… Well, they’re hurt.

Aliens Abducted My Parents and Now I Feel Kinda Left Out

Jake Van Wagoner’s film gets a mention for its title alone. Starring Emma Tremblay, Jacob Buster, Will Forte and Elizabeth Mitchell, the story follows a teenage aspiring journalist, Itsy, who isn’t best pleased when her family moves from New York City to the small town of Pebble Falls. There, she meets Calvin, a space-obsessed neighbour who has an out-of-this-world secret. It sounds strange and heartwarming in equal measure. And again, what a title.