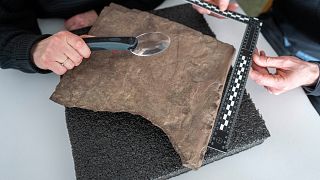 A recent discovery may be the earliest example of words recorded in writing in Scandinavia   -   Copyright  AP Photo
By Theo Farrant  & AFP  •  Updated: 18/01/2023

In a major breakthrough for Norwegian archaeology, a team of researchers has uncovered what they believe to be the world's oldest runestone.

The ancient artefact, which dates back almost 2,000 years, was found during the excavation of an ancient burial ground in the Tyrifjorden region of Norway, as part of a railway construction project.

Carbon dating of bones and wood found in a nearby grave revealed that the rune was inscribed between the years 1 and 250 AD, according to the Museum of Cultural History in Oslo.

Measuring 31 centimeters by 32 centimeters (12.2 inches by 12.6 inches), the stone has several types of inscriptions and not all make linguistic sense. Eight runes on the front of the stone read “idiberug” — which could be the name of a woman, a man or a family.

What are runestones and why is this discovery so significant?

Runestones, typically raised at gravesites during the Viking era, are stones inscribed with runic letters, the oldest known alphabet in Scandinavia.

The discovery of this runestone is particularly significant as it predates previously known examples by several hundred years, and could date back to the time of Jesus Christ.

"We thought that the first runestones in Norway and Sweden appeared in the 300s or 400s, but it turns out that some could be even older than we previously believed," said runologist Kristel Zilmer. "It's a unique discovery," she added.

The inscription on the runestone, which has been retranscribed into the Latin alphabet, is believed to be in honor of the person buried in the grave. The meaning of the word "idiberug" is still a mystery, but researchers are working to uncover its significance.

“This find will give us a lot of knowledge about the use of runes in the early Iron Age. This may be one of the first attempts to use runes in Norway and Scandinavia on stone,” Kristel Zilmer, a professor at University of Oslo says.

The runestone will be on display at the Museum of Cultural History in Oslo from 21 January to 26 February, giving visitors the opportunity to witness a piece of history that has stood the test of time.

Thieves steal €1.6 million worth of gold coins from German museum