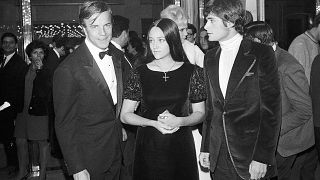 A sexual abuse case brought by two actors 55 years after they filmed a nude scene together has been described as "embarrassing" by the film director's son.

Olivia Hussey and Leonard Whiting both starred in Franco Zeffirelli’s 1968 Oscar-nominated Romeo and Juliet when they were aged 15 and 16 respectively, and claim they were ‘exploited’ after being misled about the nature of the filming.

However, the President of the Zeffirelli Foundation, Zeffirelli’s adoptive son Pippo Zeffirelli, has spoken out against the pair and their legal case.

“It is embarrassing to hear that, today, 55 years after filming, two elderly actors who owe their notoriety essentially to this film wake up to declare that they have suffered an abuse that has caused them years of anxiety and emotional discomfort,” Zeffirelli said.

The foundation boss added that the scene was “far from pornographic” and drew attention to both actors' future involvement with Zeffirelli, with Hussey starring in his TV series ‘Jesus of Nazareth’ and Whiting attending his funeral in 2019.

The Zeffirelli Foundation is based in Florence, Italy, and boasts a museum that’s home to 250 of the director’s work.

What is the Hussey and Whiting sexual abuse lawsuit?

Hussey and Whiting’s case has received international attention as the first of its kind and a possible test case in the US. It was filed in a Santa Monica court just one day before the statute of limitations on their allegations would expire.

The court case does not concern any of Zeffirelli's family members and is against Paramount. The actors, who are now aged 71 and 72, allege that they were assured that no nudity would be shown on camera.

They say that prior to filming, Zeffirelli told them they would be allowed to wear flesh-coloured underwear before persuading them to perform nude to ensure the picture’s success. They also say he later assured them no nudity would be shown, although ultimately this proved untrue.

The actors say that they have suffered career damage and mental anguish as a result of the events and seek a payment of €466 million.