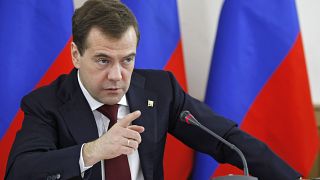 All the US Embassy in Russia did was post a peaceful message on its Twitter account. The video attached to the tweet read, "We don't think what's happening is worthy of you, and we stand in solidarity with each and every one of you."

The video showed a "No to war" sign on a Russian wall and implored the Russian people to distance themselves from Vladimir Putin's brutal campaign ravaging Ukraine.

Cultural favourites appear in the video, such as Fyodor Dostoevsky as well as political leaders Leonid Brezhnev, Mikhail Gorbachev and Boris Yeltsin to reinforce the shared intellectual and political community between the US and Russia. Putin was notably absent from the leaders displayed.

Another Russian leader who was left out of the video was Dmitry Medvedev, deputy chairman of the Security Council of Russia, who was president from 2008 to 2012 and prime minister from 2012 to 2020.

On Thursday, he wrote a menacing post on his Telegram channel. Medvedev scolded the Americans for their "vile Jesuit style" and what Medvedev deemed to be an extreme degree of hypocrisy.

He labelled the video as akin to the work of Nazi propagandist Joseph Goebbels, calling the US government "sons of bitches".

Medvedev moved from criticism to threats: He said he considered that Russia's "New Year's present" was "a set of Zircon missiles that went (...) to the shores of NATO countries".

According to Russian news agency TASS, Medvedev said that the departure of the multipurpose frigate Admiral Gorshkov with hypersonic Zirkon missiles in service will "bring to mind anyone who would pose a direct threat to Russia".

He then references that the missiles could be placed as close as 160 km off the US coastline.