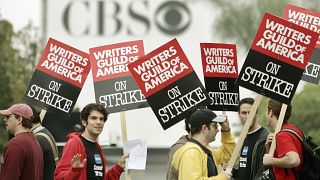 Hollywood was built on stories. But for almost as long as those stories have existed, their writers have been fighting for fair treatment.

With each new technological advancement - from home videos in the 80s to digital media in the 90s to the ongoing streaming wars - media executives have adapted their business models and writers have had to renegotiate their compensation and conditions.

Labour unions, like the Writers Guild of America (WGA), representing screenwriters in the United States, have played a huge role in negotiating contracts for thousands of industry workers.

This year, with streaming platforms and mergers throwing the film and television industry into turmoil once again, whispers are getting louder that industrial action is set to return to Hollywood, which could disrupt production of your favourite shows and movies.

The WGA’s current contract expires May 1, which means if an agreement isn’t reached between writers and media companies, there could soon be a widespread writers’ strike in Tinsel Town.

Here’s what you need to know.

What are writers concerned about?

As inflation creeps to its highest level in decades, many screenwriters in the union say their minimum pay isn’t keeping up.

The WGA traditionally bargains a three per cent increase in minimums every contract cycle, but that’s far below the current 8.5 per cent rate of inflation in the US.

The union will try to push for the right conditions to increase the minimum pay beyond the usual amount.

Other major issues include the increasing demands for free work from writers. Media companies often ask writers to pitch entire scripts for free, and then pay them nothing if those scripts aren’t accepted, even if the writer has done multiple revisions.

The guild wants to develop a mechanism to pay writers for time spent working on pitches.

Writers also want studios to stop relying on what are known as “mini-rooms”, which are what studios and networks call smaller writers’ rooms that are used before production of a TV series begins.

According to WGA board member Justin Halpern, this gives media companies an excuse to pay writers less than what they’re worth.

“Not only does it grind pay down, it also shrinks the size of the room,” Halpern wrote in his candidate statement when running for the board last fall. “Because the budgets of these rooms are often smaller, less writers are being hired, and those writers doing the hiring tend to hire more upper level writers, leaving mid and lower level writers on the outside”.

Streaming is rewriting the rules

The issue of streaming pay and residual compensation is arguably the most contentious and overdue.

As streaming platforms have grown to virtually take over the distribution of movies and television series, the question of how to pay all the people who work on them has become a hot-button issue.

Because streaming companies mostly keep their metrics private, it’s hard for industry workers to know how much money any given show or film is earning and therefore how much they are owed.

This has led to some pretty explosive feuds between media companies and talent.

One of the most covered cases was in 2021 when Scarlett Johansson sued Disney after Black Widow was released on Disney Plus instead of exclusively in theatres, saying her compensation was slashed as a result.

Writers also complain about the lower residuals that streaming companies pay for using their credited work on their platforms.

WGA board member Angelina Burnett wrote in her candidate statement that the system for calculating streaming residuals must be completely overhauled and that would “almost certainly” require a strike of some sort.

“Incrementally improving the residuals formula we currently have can only get us so far. At some point, the companies must be forced to open the black box and share data with unions and profit participants,” wrote Burnett.

Rumours of a new strike in 2023 brings back memories of the last writers’ strike in 2007-2008, when WGA members staged a walkout that ended up lasting 100 days.

The strike had catastrophic effects on the production of TV and films - more than 60 TV shows were shut down as networks flooded viewers with re-runs.

Films started shooting with hastily finished or half-finished scripts, resulting in a host of critically-panned releases, like 'Quantum of Solace' the second instalment of the James Bond films starring Daniel Craig.

Canadian screenwriter Paul Haggis famously handed in the script for the film two hours before writers walked out and Craig told Time Out London that he ended up having to rewrite scenes during filming.

In a happier turn of events, the 2007 writers’ strike may have saved one of fans’ favourite characters in the beloved series “Breaking Bad”.

Lovable drug dealer Jesse Pinkman, played by Aaron Paul, was meant to be killed off at the start of the first season. But due to the writers’ strike, the episode where he dies never got written.

Showrunner Vince Gilligan later said that he knew early on that Paul was a keeper, and that the writers’ strike shouldn’t get all the credit.

“The writers’ strike, in a sense, didn’t save him, because I knew by episode two, we all did, all of us, our wonderful directors and our wonderful producers… everybody knew just how good [Paul is], and a pleasure to work with, and it became pretty clear early on that that would be a huge, colossal mistake to kill off Jesse.”