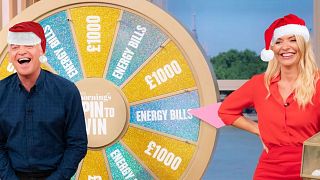 Phillip Schofield and Holly Willoughby on ITV’s This Morning presenting their “Spin To Win” game   -  Copyright  ITV - Theo Farrant
The opinions expressed in this article are those of the author and do not represent in any way the editorial position of Euronews.
By David Mouriquand  •  Updated: 29/12/2022

Our daily Cultural Advent Calendar is now concerned with our resident journalists' Highs & Lows of 2022. Today: The dystopian morning show TV clip that summed up the UK's annus horribilis.

I grew up and spent a significant chunk of my adult life in the UK, and over past few years, I have felt progressively divorced from the country I once called home.

This sad feeling of disillusionment and estrangement has only gotten stronger over the years, but 2022 was the unprecedently rubbish year during which I truly gave up any sense of optimism when it comes to Britain.

Time after time this year, the UK has seemed to outdo itself on a continued downward trajectory, to the extent I welcomed the Collins Dictionary Word of the Year with a knowing nod of approval.

If it’s true that language is a mirror to what is going on in society, then their word of the year, permacrisis, is a fitting tribute to a country that unrelentingly accumulated crises and that has become not only the butt of the joke on an international stage but also the place where shattered dreams and depression go to have a quick fondle behind an increasingly vital food bank.

Where to begin with the cornucopia of bleakness?

There’s the NHS continuing to fall apart; the increasingly awful and expensive transport; those frankly disturbing Orwellian PSAs (“See it. Say it. Sorted”); a crippling cost of living crisis that means millions have to choose between having a meal or heating their homes; a Tory government that has seen the human equivalent of an unmade bed replaced by the shortest serving PM who was surreally outlasted by a lettuce, who was then succeeded by an out-of-touch millionaire who genuinely thinks it’s a good idea to block Scotland’s groundbreaking bill on self-identification for people wanting to change legal gender.

You can also add a grim tabloid press constantly obsessed with every member of a shambolic and weakened royal family, who show no signs of joining the modern world and who have even been fanning the flames of threatened free speech.

This was especially galling during the holidays when the country’s new king talked about solidarity with those suffering “great anxiety and hardship” due to the cost of living crisis during his first Christmas broadcast – knowing that this is a man who needs his shoelaces ironed every day (true story), doesn’t use an alarm clock but employs a piper to wake him up with bagpipes every morning, and who sanctioned a funeral for his late mother which cost taxpayers a rumoured sum of between £8-20 million.

The list goes on and on, and the more I think about it, the more I see a country that doesn’t inspire greatness so much as it welcomes pity. That lettuce was the one stroke of genius that gave me hope.

I’m not naïve enough to suggest a full-scale French revolution is possible, but it might be needed. The country is definitely getting better at strikes – this is a positive sign.

So, when is enough enough? Where’s your tipping point, old Blighty? When are you going to realise you’re not now that strength which in old days moved earth and heaven, to quote Tennyson, and that you need to finally go through puberty?

In the absence of answers, one 2022 moment did epitomize the UK’s woes for me, an unnerving sequence which encompassed the whole sorry mess the country has become: Phillip Schofield and Holly Willoughby on ITV’s This Morning presenting their “Spin To Win” game.

The segment gave those who enter the chance to spin the wheel and win cash prizes, now with an added 'Energy Bills' category.

Watch the segment for yourself:

Well this episode of Black Mirror is particularly bleak, isn’t it?

The dispiritingly bleak moment, which doesn’t seem too far removed from those Mitchell and Webb sketches about a post-apocalyptic gameshow, felt dystopian and downright distasteful.

It was made all the worse by those two gurning idiots, who themselves got into hot water later on in the year for skipping the queues in order to subserviently pay their respects to the queen.

Charitably, you could say that they probably meant well and that the segment was probably done with sincere intentions. However, it remained a sad reflection of the cost of living crisis; worse, this wheel of misfortune crassly gamified the public’s desperation in a careless and disgusting manner.

Seriously, competitions to win having your energy bills paid should not be normal, and when paying your bills and keeping warm is now packaged as a new luxury prize, you know something has gone very wrong somewhere. Like, blood-in-the-urine wrong.

As if that wasn’t enough, this segment even attracted the attention of the Kremlin.

Indeed, Russia’s Kremlin-friendly news outlets seized on the story as propaganda. The host of Russian state television’s morning show, Olga Skabeyeva, reported that UK viewers were being offered heating as a prize, and the clip was used to highlight the energy struggles in the UK after Russia shut down all gas supplies to Europe.

Will next year be any better for the UK?

I hope so. I want it to succeed. I want to feel proud of the place I used to miss.

And that lettuce was a stroke of genius.

Plus, it’s hard to imagine things getting worse than in 2022. Then again, since the folly of Brexit, which has left the country poorer and more alone than ever before, I wouldn’t put anything past them.

But who knows: maybe this annus horribilis could be a cathartic wake-up call that shakes Britain out of its delusions - post-imperial, Brexit and otherwise. That or they’re going to need a lot more lettuces to keep me on side.