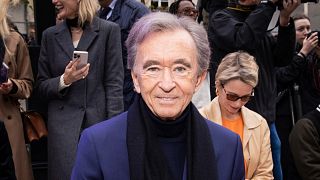 A European is currently the world’s richest person.

Bernard Arnault, the holder of the world’s largest luxury retail empire, has been sitting on this throne for a solid week now, sweeping former title holder Elon Musk from the top spot.

But the 73-year-old Frenchman is not the only multi-billionaire on the continent. Alongside him are a handful of the world’s richest people, including one woman, five heads of beauty and clothing empires, and a Russian billionaire currently sanctioned by the US.

Bernard Arnault has an estimated net worth of around €149 billion, a whopping €14 billion above his Tesla and Twitter-owning predecessor Elon Musk.

To put Arnault’s wealth into perspective, it is around ten times higher than the total value of France’s wine and spirits exports in 2021, the country’s second-biggest export.

He is the owner of some of the world’s most famous luxury brands, including Louis Vuitton, Kenzo, Moet Hennessy and Tiffany & Co.

He has also shaken hands with some of the world’s most powerful - and sometimes most controversial - leaders, such as former US president Donald Trump, his predecessor Barack Obama, Russian President Vladimir Putin, former French president Francois Hollande and current president Emmanuel Macron.

The following is a list of the richest people in Europe.

Francoise Bettencourt Meyers is the world’s richest woman, with an estimated net worth of around €66 billion.

Her net worth is roughly the same size as a third of her country’s pre-COVID-19 travel and tourism sector.

Despite her huge wealth, the 69-year-old from France is only the 13th richest people in the world. But her cosmetic empire might help her get over it, as she is currently the Vice Chair of the board of L’Oréal.

The company - started by her grandfather in 1909 - is the world’s largest cosmetic brand.

The third richest person in Europe is Amancio Ortega, whose net worth is roughly €50 billion.

While he is only the 23rd richest person in the world, most people have probably heard of, if not shopped at one of his stores.

He owns Zara's parent company, the controversial fast-fashion brand that has reached multiple corners of the world, with more than 7,400 stores across the globe.

And despite his relatively low place on this planetary list, the Spanish-born 86-year-old has an estimated value around 24 million times higher than the average Spaniard's income.

The billionaires have a net worth of around €40 billion, and they are the co-owners of the famous Parisian fragrance and fashion house Chanel, valued at around €15 billion in 2021.

Their wealth is largely inherited, as their family was one of the main backers of house’s namesake and original designer, Coco Chanel, back in the 1920s.

With a net value of around €39 billion, Giovanni Ferrero and his family are the sixth richest in Europe and the 29th on the world's rich list.

Unlike the predecessors, the Ferrero fortune mostly came from their chocolate company, not fashion, beauty or luxury goods.

They also own the firm behind European candy classics, such as a Nutella, Kinder and Tic Tacs.

Ferrero, born in Italy, is the CEO of his family’s company, and is its highest-ranking member.

Francois Pinault is the seventh richest person in Europe and 30th in the world, with a net worth of around €33.4 billion. And like many others on this list, you have probably heard of one of his assets: Gucci.

But before founding the luxury group Kering, which owns other fashion brands such as Saint Laurent and Alexander McQueen, Pinault was a high school dropout from France's northwest region of Brittany.

He also now owns the auction house Christie's International and reportedly a personal art collection of more than 2,000 works.

Klaus-Michael Kuehne is the eighth richest person in Europe and ranked 35th in the world.

He is valued at around €30 billion, which may not seem a lot compared to the rest of the list, but it is roughly the same size as 12% of the recorded total revenue of Germany's automotive industry in 2021.

The 85-year-old German gained the majority of his wealth from two shipping companies. He owns the largest sea-freight forwarder, which moves cargo ships around the world.

The 61-year-old is the largest producer of high-grade nickel. He, his wife and his daughter were all also recently listed under the US’ new sanctions against Moscow in its attempt to target people and businesses close to Russian President Vladimir Putin. While it is unclear how this would impact his placement on this list, his ranking could also change because of another, secretive reason: Russia’s hidden wealth.

As for Russian President Putin, he officially receives a state income of around €132,000. But some have heavily speculated that he could have a hidden wealth of around €188 billion, far outstretching all the people on this list.

If true, that would make him the richest person in the world.

Billionaire sells private jet after being tracked by Twitter activists

What is Coinbase and why is its IPO so significant?