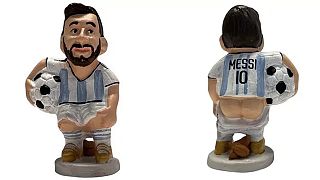 Messi as the traditional Caganer, a popular figurine which is sold out because of high demand this year   -  Copyright  Caganer.com
By David Mouriquand  •  Updated: 23/12/2022

Wander around the Christmas markets in Catalonia and you’ll end up stumbling across a "Caganer", a bare-bottomed pooping figurine wearing a traditional Catalan barrentina red cap.

The figure comes in a number of shapes and sizes and is a beloved mainstay in traditional nativity scenes.

The Caganer (Catalan for “pooper”) figure traditionally depicts a squatting peasant with his trousers dropped to reveal a bare backside. At Christmas, the miniature figures are placed alongside Mary, Joseph and baby Jesus.

This year, the curious Christmas tradition has caught world champion Lionel Messi with his pants down.

More recently, their figurines have come in the image of all manner of famous characters living and dead, fictional and real: Pope Francis, Obi-Wan Kenobi, Barack Obama, Michael Jackson and even Vladimir Putin.

"We also have it with the PSG jersey, but the one with the Barca jersey is the most popular historically,” says Sergi Alos, the co-owner of Caganer, who is fast becoming a victim of his popularity.

Indeed, the Messi figure with the Argentina shirt is sold out in Barcelona.

“Right now people want him with the Argentina jersey. There are many Argentinians here in Barcelona and they come to get it. We paint new ones every night in order to keep up with the demand."

Sorry, why is he defecating?

Faeces and defecation are common in Catalan folklore, including the popular Catalan phrase usually said before a meal: “Menja bé, caga fort i no tinguis por a la mort!", which translates as "Eat well, shit strong, and don't be afraid of death!".

As for the origin of the Caganer, it’s uncertain - but it is believed to date back to the 18th century.

While there is no consensus on what the meaning of his action is, the cheeky tradition isn't meant to be blasphemous, but rather a source of luck and prosperity for the new year.

One theory suggests that the caganer represents fertility and the fertilization of the earth, thereby being a symbol of a prosperity and good health.

Another explanation is that he represents the mischief in all of us, and that instead of denying or rejecting this natural disposition, the caganer is a way of accepting what each of us has in common. After all, when you think about it, going to the bathroom is the great equalizer: no matter who you are, rich or poor, famous or anonymous, we all poop the same.

All I want for Christmas is poo

Europe loves a pooper, and the Caganer is not the only defecating character you can find.

In Italy, specifically near the Naples area, you can stumble across Cacone or Pastore che caca, a similar figure to the Caganer. Also placed in the Neapolitan nativity scene, it is a symbol of good luck and the miracle of birth.

Similarly, the Portuguese have Cagões, a pooper who serves as a levelling device to bring the mighty down.

The tradition dates from the 1930s and the figurines also depict a man (or in some cases animals) in squatting position - but they have nothing to do with Christmas or the nativity.

It’s a type of “anatomical snuffbox”; the hole is located either on the skull or the base, and they allow a small quantity of snuff to be stored.

Merry Christmas to you all.

Why are the Brits censoring a classic Christmas song? Again

Iceland's festive traditions and why they've stood the test of time