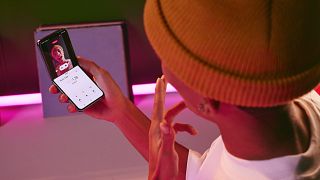 TikTok has partnered with talent show host and music executive Simon Cowell and producer Max Martin to launch StemDrop, a new way of releasing music that could revolutionise the industry.

StemDrop is a different platform that lets artists publish the stems of their songs alongside full single releases.

Stems are the individual instrument tracks for each song. The significance of putting out the stems separately from the single will allow other people to immediately create remixes and samples from the new track.

The freedom to isolate a single instrument of a new song will give TikTok users more capability than ever to manipulate new music for viral videos.

The platform is the creation of TikTok alongside Universal Music Group, Republic Records, Samsung and Syco, Simon Cowell’s entertainment company.

Anyone can be a producer

StemDrop will officially launch next week on October 26 with the exclusive TikTok release of 60 seconds of a new single by Max Martin, Savan Kotecha and Ali Payami. TikTok users on the StemDrop platform will then be able create their own music from the drums, bass guitar, and vocals of the single.

Speaking to Euronews Culture, Paul Hourican, Global Head of Music Operations at TikTok explained that “Max Martin is one of the greatest songwriter and producers in the world, having written for a number of high profile and successful recording artists. Sharing this track, co-written with Savan Kotecha and Ali Payami, exclusively with the TikTok community is in fact sharing an insight into the craft of songwriting itself.”

“Taking a great track and providing the tools to mix it and recreate new versions in a new, innovative and accessible way will open up the creative process and support new talent in exploring their own songwriting capabilities,” Hourican says.

“Songwriting and songwriters are often overlooked and StemDrop will place it front and centre with TikTok’s global community in a way never done before,” he adds.

TikTok believes StemDrop will open up the process of song creation, demystifying it for average users while giving them the capability and tools to become producers in their own right.

“It places the craft of songwriting at the heart of our campaign and will demonstrate what you can do with the right material - at the heart of any viral hit is a song and behind that song are often a team of songwriters,” Hourican says.

StemDrop has the potential to permanently change the way music is released. The role of TikTok in deciding contemporary music tastes is undeniable. In global music charts, many of the songs getting the most airtime gain popularity through content creators using them as backing tracks to viral TikTok videos.

In August, TikTok recognised the popularity of some of its most viral songs by releasing a classics album with orchestral arrangements.

The renewed popularity of Kate Bush’s ‘Running Up That Hill’ after it featured in a Stranger Things episode was in part thanks to the over 500,000 TikTok videos posted of the song.

Similarly, Harry Styles’ ‘As it Was’ would always be a massive hit, coming from the ex-One Direction member. But the popularity of its middle eight as a TikTok track might have been what pushed the British singer’s latest album into the stratosphere.

With more than a billion users, TikTok continues to be the fastest growing social media platform.

The forefront of pop music

Recognising the potential for defining popular music StemDrop was the brainchild of Simon Cowell and seminal producer Max Martin, who has produced just about every massive pop song ever from Britney Spears to Taylor Swift.

Cowell first came across TikTok three years ago during auditions for his shows ‘America’s Got Talent’ and ‘Britain’s Got Talent’.

“Suddenly out of nowhere, and I'm not exaggerating, every single singer came out and just talked about TikTok. Every meeting we had with a singer or a record label it was TikTok, TikTok, TikTok,” he says.

Seeing the popularity of songs like the ‘Sea Shanty’ make waves across the platform, Cowell teamed up with friend, TV and music executive Tim van Rongen, to develop the platform idea.

“The heart of his idea was essentially about somebody writing a great song, and that really resonated in my head,” Cowell says. “We met a week or two later after, and then we discussed the idea of taking it somewhere else: we should simplify the idea and take it to one of the big social media companies. I quickly realised we should go to TikTok with this idea, and that's really where it came from.”

Cowell relates how Max Martin’s massive song ‘Hit Me Baby One More Time’ was nearly released by his boyband Five instead of Britney Spears. Cowell was too late on that occasion and Martin promised the song to Britney, an unknown at the time. Cowell says it shows “that song would have been a hit for anyone.”

“So, this really is at the heart of the idea of StemDrop: just imagine somebody who is on TikTok, trying to get some traction, who now has the ability to make their own version of a song written by the most successful songwriter of our time. It's very compelling,” Cowell says.

Will this be a new chapter in how music is released and made popular? That remains to be seen. The involvement of TikTok into the StemDrop platform however does make it a feasible way in which music listening could shift once again.

“We’re excited to see the new versions and how they play out with our global community. We don’t know what will emerge, what will prove a success, how the reaction will play out in different regions and amongst the sub-communities on TikTok - that’s the magic of our platform and the community that makes it what it is,” Hourican says.