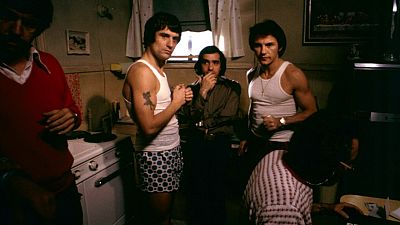 “The clock will strike for everyone. Even for you, Goncharov.”

It’s an iconic line up there with some of cinema’s greatest like “We’re gonna need a bigger boat” and “Frankly my dear, I don’t give a damn”.

There’s a strong case that Scorsese’s 1973’s film Goncharov is his masterpiece. It has standout performances from his mafia regulars Robert De Niro, Al Pacino, and Harvey Keitel, a killer soundtrack, and more dramatic twists than Goodfellas or The Departed.

As Twitter slowly burns down at the hands of its unfunny narcissist owner, OG blog site Tumblr is reminding everyone why we all used to love it.

The users of Tumblr have all come together to invent a new Scorsese film, and everyone is in on the joke.

As far as I remember, I always wanted to be a Goncharov

The origin of Goncharov is as mysterious as the film itself.

A few months ago, Tumblr user zootycoon posted a picture of knock-off boots they’d bought with a label describing “The greatest mafia movie ever made”.

One user posted under zootycoon’s image: “This idiot hasn’t seen Goncharov” ... And a meme was born.

Tumblr users quickly came together to create a storyline, character bios, thematic discussion and posters for the sadly forgotten film.

As we edge closer to the 50th anniversary of Goncharov, Tumblr users have celebrated the nine-hour extended cut that never made light of day.

Taking place in Naples after the fall of the Soviet Union, Lo Straniero, known as Goncharov and played by De Niro, has been banished from Russia to resettle in Italy. Alongside his wife Katya (Cybill Shepherd) and his friend/rival Andrei (Keitel), Goncharov must try and establish himself among the Italian mafia while keeping his family alive.

Let’s not focus too hard on how a film “made” in 1973 takes place after the fall of the Soviet Union.

Instead, let's focus on the incredible work that fans of Goncharov have put into constructing the artificial narrative around the forgotten film.

There’s a googledoc with a compiled set of events, character bios and iconic quotes.

Goncharov even has a soundtrack you can listen along to on Spotify.

One of the best scenes described is an early one known as ‘Anchovies’.

“The 15 minute long single-take is well known for its unrehearsed feel, as Andrei and Goncharov discuss the how the “old ways” of pizza must be respected, how the “new, progressive” ways of pizza should be considered, and how whether “anchovies” are really so bad, if it’s a matter of taste.”

Tumblr users have pointed out that this scene also has crucial reference to the homoerotic themes of the film between Goncharov and Andrei.

But Andrei will turn on Goncharov, ending the film with a classic bit of Scorseseian betrayal.

“Goncharov sits next to Katya on the dock as she cradles him, she tells him how though she loves him they are unsafe with them both being fiery personalities and how if both time and blood have been spilled, he can topple over the edge. She ends by wishing him sweet dreams into another life and Andrei shoots him from behind. She drops her own watch into the bullet wound,” the googledoc details.

Better to be Goncharov for a night, than a schmuck for a lifetime

Other incredible suggestions from Tumblr include that “Scorsese initially wrote the script with Leonardo DiCaprio in mind. However, Leo wouldn’t be born until 1974. So, Scorsese went ahead with his second choice, Robert DeNiro.”

The craze has made its way across the internet.

Even Martin Scorsese’s Wikipedia page has been protected from editing due to too many people trying to add references to Goncharov.

People are reviewing Goncharov on Letterboxd.

All we need now is Scorsese’s take on the whole thing.

Maybe he’ll even make it his next project...

Come on Martin - Release the 9-hour Goncharov edit, you coward!