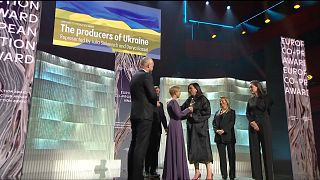 At this year's European Film Awards hosted in Iceland's capital Reykjavík, all Ukrainian producers were rewarded by Eurimages -- the cultural support fund of the Council of Europe -- in a show of solidarity with a young and rapidly expanding film industry, which has been hit hard by the war.

Julia Sinkevych is a Ukrainian producer and former director of the Odesa Film Festival. She received the award on behalf of her peers, many of whom are risking their lives on the front line. Most Ukrainian producers have decided to remain in their war-torn homeland.

"It's a great honour to represent all the Ukrainian producers here, and to receive this award during [these] turbulent and tragic times Ukraine is going through", she said.

Several Ukrainian films, including fiction and documentaries, were nominated for the European Film Awards.

But it was 'Mariupolis 2' by Mantas Kvedaravičius which posthumously received the award for best documentary. The Lithuanian filmmaker was murdered by the Russians during the siege of the Ukrainian city Mariupol in April.

"The director of this film, my dad, is unable to be here today, so [I'd] just like to say how proud of him I am", said Tėja Kvedaravičius, Mantas Kvedaravičius's daughter. "He lost his life in a kind of selflessness most of us can't hope to achieve, delivering medicine to people. I feel so fortunate to have had someone so brilliant in my life."

Mariupolis 2 is a raw portrayal of life in the Ukrainian port city amid the chaos and of war. It was completed after the filmmaker's death by his fiancée and was presented at the Cannes film festival in extremis.

Euronews spoke to two of the Ukrainian award-winners in Reykjavik. Julia Sinkevych explained that "filmmakers and creative people react differently actually. Some of them have this creative power to move on or to create new stories and films and some are just demotivated and stuck in the middle of something and have just to fight for their physical survival."

"Being a producer in Ukraine right now is extremely challenging and extremely complicated, so I would not wish any of my European colleagues to find themselves in this position and in this situation", Ukrainian producer Darya Bassel told Euronews.

Darya Bassel is the producer of 'Butterfly Vision' -- a harrowing story of a Ukrainian soldier who was raped while being held captive in Donbas -- reminding us that the war truly began back in 2014.

The film was completed on the eve of Russia's invasion of Ukraine and was presented at the 2022 Cannes Film Festival in the Un Certain Regard category.