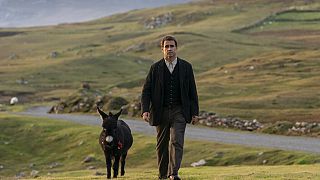 Irish actor Colin Farrell in a scene from "The Banshees of Inisherin."   -   Copyright  Jonathan Hession. Searchlight Pictures via AP
By Euronews  •  Updated: 14/12/2022

After scandal and boycott plunged the Hollywood Foreign Press Association into disarray and knocked its annual award show off television for a year, the Golden Globes geared up Monday for its return by showering nominations on The Banshees of Inisherin.

Having already received widespread acclaim, the film is set on a fictional Irish island Inisherin and follows Pádraic Súilleabháin (Farrell) as he is ignored by his old friend Colm Doherty (Gleeson).

Also in the running is All Quiet on the Western Front, based on the novel by Erich Maria Remarque which has been nominated for Best Motion Picture, Non-English language.

The Netflix production, directed by Edward Berger, follows the story of a German soldier's physical and mental trauma during World War I.

The original book sold 2.5 million copies in 22 languages in its first 18 months of print. The book, first published in 1928 and its sequel "The Road Black" (1930), was banned in Nazi Germany.

In 1930, the book was adapted into an Academy Award-winning film of the same name, directed by Lewis Milestone.

Review of the Year Film Festival 2022