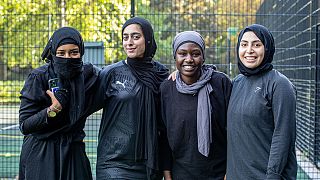 On a cold, leafy football pitch in Central London, a young woman dressed in black passes a football to her teammates. Their headscarves and loose clothing flap in the wind as the women display their formidable soccer skills. Yasmin, the team's founder, is a practising Muslim and set up a team for women who share her faith.

"Sisterhood FC is a Muslim women's grassroots football club. It came about in 2018 when I was at university," says Yasmin. "I went around the university asking any girl who wore a hijab to come to a training session," she says.

Yasmin has played football since she was a child and feels confident playing with and against men and women. Her religion is central to her life, but she says it did not prevent her from playing football.

Sisterhood FC was established to provide Muslim women a space to play football comfortably and confidently. While most women choose to wear hijabs and abayas, it is not a requirement for joining the team.

A safe space to play

Yasmin says that some teammates are nervous about playing football at other clubs because they previously felt discrimination. According to Mend, anti-Muslim sentiment has risen sharply in England over the last two decades. Many victims of Islamophobia experience fear, anxiety, and panic attacks. Yasmin believes that Sisterhood FC can help change negative perceptions about Muslims.

"We're normal; we're like your everyday people that play football in the park with friends. We like to have a kickabout. It's a sisterhood; that's what the team is about." Yasmin says.

Atiya, the team’s coach, echoes Yasmin’s sentiment. She explains that she acknowledges that people have certain perceptions of her playing football as a Muslim, but she doesn’t feel like she’s waving a flag for anything. “I just turn up to play football in a place I'm comfortable in,” Atiya says.

Kamara, the club's Operations Officer, explains that Sisterhood FC was valuable in her journey with Islam. "Before I converted, I used to play quite a bit of football. Afterwards, football died down because I didn't know where to play football and be modest at the same time," she says.

'All sisters are welcome.'

When Kamara joined Sisterhood FC, she found women who understood her concerns. It was a club where everyone was welcome. "We ensure that all sisters are welcome; it doesn't matter what they wear or looks like, their disabilities, capabilities, or anything. We welcome all sisters here," Kamara explains.

Atiya, the team's coach, says each player brings a unique quality to the club. "We had a few girls come in that brought a new competitive spirit. That really upped the competition," she says. "Then you have girls just making everyone laugh in training", she adds.

Sisterhood FC regularly competes against other teams across London. According to Atiya, their spiritual beliefs and values influence their sportsmanship. "We make sure we shake the opposition's hand. We make sure the opposition is okay and that we're treating them right," she says.

The team says their faith motivates and encourages them to keep fit, and they are committed to a rigorous training program. "Every week, we've been training and looking at what we can do better," says Atiya.

The costs of holding training sessions on pitches in London are high, and Yasmin continuously looks for ways to finance the program. "It's very hard to get funding, and it is also difficult to find pitches to play on. It's so expensive to rent them by the hour," she says.

Despite the challenges, Yasmin says the club is growing and hopes it continues to make its mark on football culture in England. "We want to inspire all the little Muslim girls so they can play football," she says.

Sisterhood FC intends to carve their own path in the sports world. They have become an inspiration to anyone who enjoys the beautiful game regardless of faith. The team says that football is for everyone.

Meet the Tribal Athletes running for recognition in India