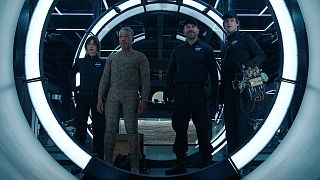 Netflix is no stranger to innovation.

But next year, they'll be offering their subscribers an entirely new experience.

Launching on 1 January 2023, a new eight episode series titled Kaleidoscope, will encourage viewers to watch the series in whatever order they want. Thus, not everyone’s experience of the show will be the same.

The non-linear show focuses on a crew of masterful criminals as they plan the biggest heist in history. Each episode will be named after a colour, that can be watched in any order. The only episode that every viewer will end on is ‘White’, which concludes the show

"Loosely inspired by the real-life story where seventy billion dollars in bonds went missing in downtown Manhattan during Hurricane Sandy, Kaleidoscope consists of eight episodes spanning from 24 years before the heist to 6 months after," says Netflix.

Netflix recently released a behind-the-scenes first look at the show, featuring interviews with the show's cast and creators. See below.