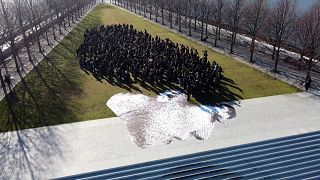 Hundreds of people in New York have taken part in protest organised by French photographer and street artist JR against the Iranian regime.

The crowd gathered on Roosevelt Island to stand alongside a portrait of 16-year-old Iranian Nika Shahkarami, who went missing and died after attending a demonstration in Tehran.

"I'm so happy that JR was our voice," said one Iranian who traveled from New Jersey. "I think it's important for artists outside (of Iran) to be the voice of people".

"I was thinking about it and I didn't find the idea right away. I'll admit it took me a few weeks for me to figure out what to do. At the same time, like a lot of people, I felt a bit powerless. And then I thought I should create an image where people are the hair and in fact an image that can't be done without people, without the help of people. That's how the idea came about."

The French artist explained that it was Nika's aunt who sent him the portrait.

"The images of Nika were deleted on social media. But it meant a lot to the family that we use this particular picture. And so that's the one we started with two weeks ago in Brazil and now here in New York."

Aila Ahkhmi, a participant from New Jersey, said that she was pleased the French artist was involved.

"I'm so happy that JR was our voice, really, really happy. And I thought it was my responsibility to come really to participate in that. And I appreciate him a lot."

Roudabh Riggs, president of The Woman Life Freedom in Iran Foundation, said getting public support is paramount to bringing about change.

"Here in US, we use our freedom, and we are trying to amplify their voice and raise their voice. And, you know, try to affect the public opinion here. So, they can push the government and they can stop this regime."