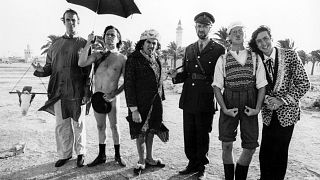 The beloved sketch series Monty Python’s Flying Circus aired its final episode on this day in 1973.

The groundbreaking, surreal and often satirical show was broadcasted for five years on BBC and the final, 45th episode featured sketches like ‘The Most Awful Family in Britain’, ‘Patient Abuse’, ‘An Appeal on Behalf of Extremely Rich’ and ‘The Man Who Finishes Other People’s Sentences’.

1979: Andrea McArdle, center, who was the original Annie on Broadway in 1977, Shelley Bruce, left, the second Annie, and Sarah Jessica Parker, the current Annie, posed on the stage of the Alvin Theater in New York City. They were attending a presentation of Gold Record awards from the original cast recording of the Broadway musical comedy "Annie."