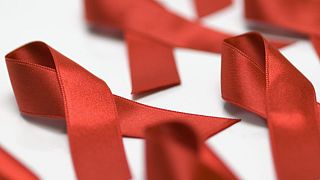 The red ribbon is worn on 1 December every year to raise awareness for World AIDS Day   -  Copyright  Thinkstock
By David Mouriquand  •  Updated: 01/12/2022

Every year, the world marks 1 December as World AIDS day to raise awareness and unite in the battle against HIV, which first emerged in 1981.

It used to be the top story that day, but has now taken a backseat to war, soaring energy prices and social media fads.

Despite come a long way since the mid-90s, the peak of the epidemic, and falling numbers (according to the World Health Organization (WHO), the global number of new HIV infections has dropped by 32% between 2010 and 2021) the fact is that there's still work to be done.

Euronews Culture spoke to Alex Sparrowhawk, HIV and Ageing Manager at the Terrence Higgins Trust in the UK, to talk about the charity, the shifting perceptions around HIV and the lasting stigma in many people’s mindsets.

Alex Sparrowhawk: Terry Higgins was one of the first people to die from HIV in the UK. He passed away in 1981 and his partner and friends at the time wanted to make sure than no one else was in a space where they were on their own trying to combat this new virus at the time. They decided that they wanted to do something together and they decided to set up what became the Terrence Higgins Trust, initially providing support to people who were dying from AIDS. But later the charity began to do more work to campaign for the UK government to do more for people who had AIDS in the 1980s – calling out that many people were essentially being abandoned and left alone. The charity has been going for 40 years now and we’re still providing support to people who are now living with and thriving with HIV.

The red ribbon was created in 1991 and has become the symbol of awareness and solidarity for people living with HIV/AIDS. How did that symbol come about?

Well, a group of artists came together in 1991 and they wanted to create something that was a symbol to show solidarity and which marked remembrance to those who we had lost. The red ribbon was chosen because it was something that was accessible, that everyone could get a hold of and be able to make themselves as well. It was seen as something that could be owned by the community rather than anyone else. Today, 30 years later, we’re still using that symbol and we still wear the red ribbon with pride, with solidarity on World AIDS Day, shoulder to shoulder with people with HIV and thinking of those who were lost to the virus.

What in your opinion have been the changing perceptions regarding HIV and has there been an evolution of awareness through popular culture and art?

We’ve definitely seen changes over the years. Unfortunately, stigma around HIV does still exist and many people’s mindsets are still trapped in that era of the 1980s and early 90s, before effective treatment was made available. More recently, TV programmes such as It’s a Sin, which was shown in the UK, have really allowed to bring HIV back into the mindset of the public and educate a new generation. But it’s also provided a mechanism for organizations like the Terrence Higgins Trust to talk to people about HIV and make them realize what it means to live with HIV today.

Is enough being done on an educational level in order to raise awareness and destigmatize HIV?

The Terrence Higgins Trust would definitely like to see more done, especially in schools. In the UK, we have now compulsory relationships and sex education, but we know that that isn’t always delivered effectively. We try to go into schools ourselves with programmes like Positive Voices, which actually takes people with HIV into schools to share their own experiences, to talk about their diagnosis and show people that HIV is something that can happen to anyone but it also doesn’t have to be a limiting virus, and it’s something that people can live well with if they are aware of their status and have access to treatment.

Recently, WHO recommended a new name for monkeypox – mpox – to mitigate the negative impact of the name. Does an initiative like this bring you hope, and have there been any recent examples that have given you more hope for awareness and shifting of mentalities with regards to HIV and AIDS?

I think we’re seeing this year with the monkeypox outbreak that some of the attitudes towards sexually transmitted infections and sexually acquired infections still remain the same as they did many years ago. However, it is good to see leading organizations like the World Health Organization taking steps to combat stigma and to put things into place that take an association or blame connected to particular populations or regions. I think it’s really important that we remember that viruses are just that – they are not sentient, they don’t have an agenda. And that comes as us as people and we should, regardless of anyone’s HIV status, treat everyone with respect and integrity. And that’s something we’ll continue to fight for.

Debunked: COVID-19 vaccines do not create variants of HIV/AIDS