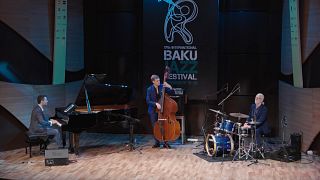 The beat of Baku’s beloved Jazz Festival recently rang out in the Azerbaijan capital, as it returned for its 17th edition. The event seeks to bring together an eclectic mix of musicians and bands from all over the world.

Jazz first took hold in Azerbaijan in the early part of the 20th century. It has since become deeply ingrained in the country’s culture, and remains popular to this day.

Among those present this year was celebrated composer and drummer Yogev Shetrit.

A hallmark of Shetrit’s work is the fusion of traditional North African and Mediterranean tones with contemporary jazz.

"Tonight we are going to perform and play my own compositions from the “New Path” and “Serenity” albums", said Shetrit.

The drummer and composer also told Euronews that fans should listen out for: "a tribute composition from Aziza Mustafazade", which he described as, "a tribute for Azerbaijan’s culture".

Also in attendance this year was Michael Schiefel’s Istanbul Quartet.

First inspired by the post-wall jazz scene in Berlin during the early 1990s, Schiefel has worked on a wide range of solo and band projects including his latest incarnation.

"Two of [the Istanbul Quartet] are from Turkey, one of them is from Greece, and I am from Germany, so it is a multicultural project", Schiefel told Euronews.

Every year the festival in Baku sees a diverse range of musicians play in various venues across the city. One such group is the Italian duo Federico Casagrande and Fulvio Sigurtà.

"Me and Fulvio met 15 years ago and started playing together", Federico explained. "Guitar is a harmonic instrument and trumpet is a melodic instrument, so it would make sense to do things together", he added.

"We both wrote music for this duo over the years, very different music and we kept growing and playing together since then".