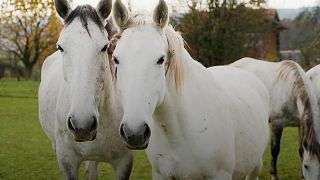 2022 will be remembered as a remarkable year for lovers of an exceptional European breed, the Lipizzan horse.

Eight European countries made a joint bid to the UN's cultural agency to grant the tradition of Lipizzan horse breeding UNESCO heritage status, which was granted on the 1st of December.

The Lipizzan horse is a noble breed, with ancestors that can be traced back to 1580 when Habsburg Emperor Ferdinand I established a stud farm near Lipica (now Slovenia).

Lipizzan is an endangered horse breed as there is estimated to be only 8000 left in the world.

One of the stables hoping the UNESCO status will help guarantee the Lipizzans’ future is Vucijak stud farm, established in 1946 in the former Yugoslavia.

Lipizzans are distinguished by their grace, beauty and swan-like necks, according to Miroslav Milanković. the stud farm's manager.

Their special lineage spans almost 500 years of history. It’s also said that Lipizzans are the proudest of horses, as well as the most temperamental and energetic.

If you want to learn more about Lipizzan horses, click on the video player above.

This is Durbar Festival: Nigeria's most vibrant horse parade

How can therapy involving horses help people with disabilities?