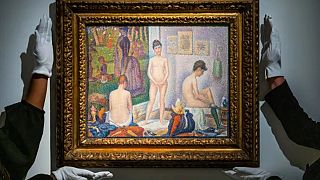 An art collection amassed by Microsoft co-founder Paul Allen have been sold for a record $1.5bn, with a flurry of records for works by Van Gogh, Cezanne, Gauguin, Seurat and Klimt.

The auction set a record for the most valuable single-owner art collection ever sold at auction, Christie's said.

The previous most expensive collection sold at auction was the Macklowe collection whose two tranches netted $922 million.

The five centuries of touchstone works featured some of the most significant creators in history.

The highest price ever for a van Gogh painting was also achieved; with the artist’s 'Verger avec cyprès' sold for $117.2m.

"I think this is a sale that sort of exhausts superlatives," said Johanna Flaum, vice-chairman of 20th and 21st Century Art at auctioneers Christie's.

"This is the most valuable collection ever sold at auction. It's really a once-in-a-generation type of event."

Allen co-founded Microsoft with Bill Gates in 1975, becoming fabulously rich as the company grew into the computing behemoth it is today. By the time he died in 2018 at the age of 65, he had bought some of the most important works created in the last half a millennium.

Refik Anadol is making machines hallucinate for his MoMA debut