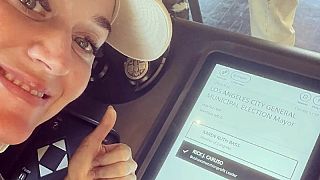 Singer Katy Perry is feeling the wrath of the internet after voting for former Republican Rick Caruso to be the mayor of Los Angeles.

Earlier this week, Perry, who previously backed Hilary Clinton in 2016, tweeted out a video in support of abortion rights and Roe v Wade. But just a few hours later, she posted a photo to Instagram showing her casting her ballot for Caruso with a thumbs-up.

“I am voting for a myriad of reasons but in particular because Los Angeles is a hot mess atm,” she wrote.

After all, she’s shown that she’s a civic-minded person who has participated in an important act of democratic value… And unlike many states, it is not illegal to take photos inside polling stations in California.

Well, it’s because Caruso, a billionaire and a devout Catholic, was formerly a Republican who switched his voter registration to Democrat in January before announcing he would be running for LA mayor. He is running against Joe Biden-endorsed candidate, Congresswoman Karen Bass.

So far, so unimpressive... Except that the 63-year-old politician doesn’t have the cleanest of records when it comes to reproductive rights.

His views were exposed in a 2007 interview in LA Magazine, which reported that “he opposes abortion in most cases but would support some stem cell research”.

Since then, Caruso has donated nearly $1 million to Sen. Mitch McConnell and former President George W. Bush, who have backed anti-abortion policies.

Now, planned parenthood has called out Caruso over donations to anti-abortion-rights candidates that were made as recently as this year.

It has also been reported that the University of Southern California’s Caruso Catholic Center - named after the candidate made a $9 million donation - has publicly opposed California’s Proposition 1 which aims to protect abortion rights in the state following the overturning of Roe v Wade.

The internet backlash was swift, with many questioning whether the ‘California Girls’ singer and American Idol judge was anti-choice, a hypocrite or just plain dumb:

Perry is not the only so-called "liberal" Hollywood celebrity to publicly support Caruso.

Elon Musk, Scooter Braun and Gwyneth Paltrow have fawned over him.

Chris Pratt posted that he was also endorsing him because he’s a “builder” who “knows how to get s**t done.”

Kim Kardashian has also shared that she had previously met with Caruso and decided to back him because he can “really help with the crime” and “homeless issue.”

Despite the sighing, the news is hardly surprising.

The voting choice of “liberal” elites who have a performative tendency to market themselves as “feminist” makes some sense, as incontinently wealthy people tend to vote for other extremely wealthy people who will doubtlessly ensure that class interests remain sclerosed.

It is, however, eyebrow-raising for celebrities, especially those who jump on any platform that'll have them to bemoan reproductive and LGBTQ+ rights being taken away, to endorse right-wing donors who hold anti-abortion stances.

Maybe it’s best to stick with the classic ‘I Voted’ sticker next time instead of getting the camera out.

Brace yourselves: The 2022 Sexiest Man Alive has been crowned