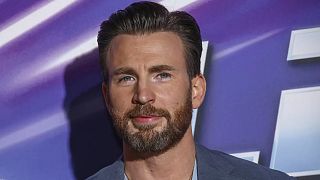 Stop wondering and start salivating. The results are in and Chris Evans is officially People’s Sexiest Man Alive for 2022.

The star of Sunshine, Knives Out, The Gray Man and Marvel’s former Captain America (apologies to all those who aren’t au fait with the MCU’s developments, but he is no longer "America's Ass") has been revealed as the hunk of the year during a broadcast of The Late Show With Stephen Colbert - who, let’s face facts, should have been at the top of the list, but nevermind.

“It is with humility and gratitude that I am thrilled to announce that People magazine has decided to award me the incredible honour,” Colbert began, before continuing: “…Of announcing the sexiest man alive for a second year in a row!”

Evans stares down the camera and says: “Go vote tomorrow.”

His comment comes as no surprise considering the looming midterm elections in the US and the fact that the Boston native has always been politically engaged. He has often used his social media presence to raise awareness and encourage people to do their civic duty, and continues his involvement with the civic engagement website A Starting Point, which he co-founded in 2020. The site is devoted sharing various points of view on issues that are of interest to the United States electorate.

So smouldering good looks and brains...

What hope do the rest of us have?

With regards to the award, Evans stated that it is a milestone, “something that as I become old and saggy I can look back on and say ‘I remember then…’” and that the title "feels like a weird form of humble bragging." However, he was eager to share the news with his biggest fan: his mother.

"My mom will be so happy," Evans told People in an interview. "She's proud of everything I do but this is something she can really brag about."

The actor also told People he's thinking about marriage and having a family, saying, “That’s absolutely something I want.”

He said he didn't expect to talk publicly much about his private life though. “Some things you want just for you, or just for my family and my friends.”

Here are some more pictures to get you through the week:

The sexiest man alive feature is an annual event since the award’s inception in 1985.

Evans takes the baton from another Avenger, Paul Rudd aka: AntMan, and other recent honorees include Ryan Reynolds, Adam Levine, Richard Gere, Channing Tatum, David Beckham and a trio of Marvel alumni: Chris Hemsworth, Michael B. Jordan and Idris Elba.

That and bulging biceps, magnificent jawlines that could cut diamonds and devastatingly attractive eyes that only inspire two words: Hubba Hubba.

But capes seem like the easiest fix if anyone is hankering for next year's sexy distinction. Let’s go with capes.

Why is Katy Perry currently the internet's least favourite person?

Marvel Universe to get its first ever transgender superhero