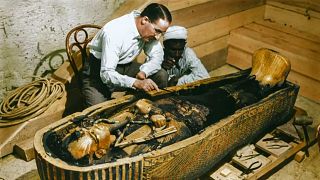 It has been 100 years since the treasure-filled tomb of King Tutankhamun was discovered in the Valley of the Kings.

He has become the most famous ancient Egyptian pharaoh in the world, thanks to the incredible condition of his final resting place and the "wonderful things" found alongside his body.

News of the discovery sparked a worldwide fascination in ancient Egypt and the legends and mysteries surrounding King Tut's tomb still enthral history lovers around the world.

King Tutankhamun was the young pharaoh whose ancient tomb and opulent artefacts have fascinated generations since they were first discovered.

He was only 9 years old when he ascended the throne during the 18th dynasty in Egypt, ruling until he was 18 or 19.

For many, "King Tut" is the ultimate symbol of ancient Egypt's glory.

How was his tomb discovered?

By 1922, British Egyptologist Howard Carter and his team of Egyptian excavators had spent five unsuccessful years searching for an undiscovered royal tomb in Egypt’s Valley of the Kings.

However on 4 November 1922, the team eventually discovered steps leading to King Tut's burial room, hidden in the debris near the entrance of King Ramses VI's nearby tomb.

Many credit a 12-year-old water carrier called Hussein Abdul Rassul for accidentally discovering the tomb, after tripping on a stone whilst fetching water for a team of archeologists.

Details of the room within emerged slowly from the mist, strange animals, statues, and gold, everywhere the glint of gold

Howard Carter
From 'The Discovery of the Tomb of Tutankhamen'

What was found inside the tomb?

Miraculously, the tomb, consisting of four separate chambers, was discovered to be virtually intact, with its treasures untouched after more than 3,000 years, unlike previously discovered tombs belonging to other pharaohs.

Its discovery, therefore, provided archaeologists and historians with incredibly valuable information on the religion, rituals, and culture of the ancient Egyptians.

More than 5,000 priceless artefacts made up the surprisingly rich burial, many of which were in extremely delicate condition and required an unprecedented level of care to remove (as they were liable to fall apart at the touch).

"When (Howard) Carter discovered the tomb on November 4th 1922, he found 5,398 pieces. Most of them were gold. The tomb itself is a very modest tomb, it's a very small tomb compared to the rest of the tombs in the Valley of the Kings," says Mostafa Waziri, the Secretary General of Supreme Council of Antiquities.

Despite its size, the tomb was filled with everything the "Boy King" would need for the afterlife, including furniture, chariots, wine, fresh food, clothing musical instruments and weapons.

The four chambers inside the burial consist of an antechamber, a burial chamber, an annex, and a treasury.

The antechamber was the first room that Carter entered (on 26 November 1922), and contained many of King Tut's prized possession that he used during his life, including three golden animal couches, a paper fan, and pieces of four war chariots.

Beyond the antechamber lay the ornately decorated and excellently mummified corpse of the late great King Tutankhamun in the burial chamber, which was guarded by two enormous figures of the god Anubis.

The walls of the burial chamber are painted with different scenes of the pharaoh interacting with the different gods and goddesses.

The legacy of Carter's discovery

When news of Carter's bountiful discovery broke, it astonished the world. 'Egyptomania' was created and it has never really stopped.

The tomb's artefacts have toured the world several times over, and Tutankhamun has become undoubtedly the most famous pharaoh in Egypt's history.

Carter's discovery 100 years ago is being celebrated at the new Grand Egyptian Museum in Giza, which hopes to display all 5,398 artefacts (many of which have never been displayed before) together for the first time.

"It will be the first time in history to see those 5,398 pieces displayed in one museum," says Waziri.

Currently a 3,200-year-old statue of Ramses the Great dominates the central hall of the museum.

Many archeologists believe there is still much more to be uncovered from Tutankhamun's tomb, including a potential hidden second chamber containing the body of another ruler, such as fabled Egyptian queen Nefertiti -whose mummy has never been found.

Only time will tell what remaining secrets will be uncovered from within King Tut's legendary tomb.