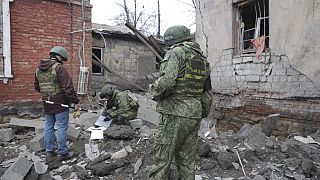 Evgeny Afineevsky's new documentary, Freedom On Fire, is a close up look at the horrors of the war in Ukraine.

The director already has one Oscar nomination under his belt for the Euromaidan documentary in 2015.

For this new film, he worked with more than 40 cameramen and conducted hundreds of interviews to detail exactly what life is like in a war zone.

When asked about the reluctance of some EU countries to get involved in the conflict, Afineevsky warned that history tends to repeat itself.

"All these lessons need to be reminded. I think people who are making these decisions in the government need to be thinking much more wisely because they are jeopardising the lives of their own people, those who voted for them," Evgeny Afineevsky told Euronews Culture.

One of the main characters in the documentary is Hanna Yurkina. She was trapped for more than 60 days in the underground tunnels of the Azovstal steel factory in Mariupol with her baby.

Yurkina's husband is a prisoner of war. To this day, she is waiting for news of what happened to him.

"On one hand, I escaped from Azovstal. But on the other hand, my husband is still there. And I feel a responsibility to liberate him and the other captured soldiers who saved my life and the life of my son,” she told Euronews Culture.

Freedom on Fire was completed in just six months. It aims to raise awareness of a conflict which some fear is slowly attracting less and less attention from the international community.