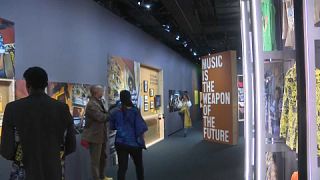 This week's tour across Europe's best arts and cultural events begins in the French capital where the Nigerian Afrobeat star Fela Kuti is taking pride of place at the Philarmonie de Paris.

The Nigerian singer and saxophonist, who died in 1997, left his mark on the history of music by creating a new movement at the end of the 1960s: Afrobeat, which combined jazz and Yoruba music.

The exhibition traces the musical and political career of Fela Kuti, nicknamed the "Black President". There are many photos and videos to see, especially of the thousands of concerts he gave in Nigeria and around the world.

Following the mash potato incident on the 23rd of October at the Museum Barberini in which Claude Monet's painting Grainstacks was splattered, the Potsdam's museum in Germany reopens to the public this Sunday for an exhibition devoted to the links between magic and surrealism.

The renewed interest in surrealism is explained by the ubiquity of the supernatural, the strange and the fantastic in contemporary culture as witnessed on the small screen in popular productions like Game of Thrones or Stranger Things.

On the 18th of October, the Guggenheim Museum in Bilbao celebrated its 25th anniversary.

The museum was designed by one of the greatest contemporary architects, Frank Gehry. Its opening in 1997 revitalized a city and a region, giving the Basque Country a museum of international dimension where visitors flock from all over the world.

For this event, three exhibitions are devoted to the museum's collections, rich in a thousand of treasures. To be discovered until January 2023.