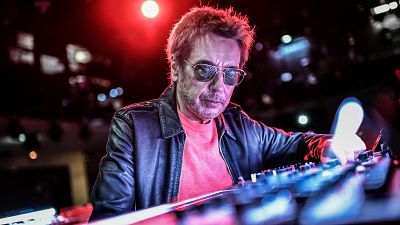 French composer and producer Jean-Michel Jarre poses on stage prior to perform a 2021 New Year's Eve virtual reality concert "Welcome to the other side"   -   Copyright  STEPHANE DE SAKUTIN/AFP or licensors
By Pascale Davies  •  Updated: 18/11/2021

French electronic music pioneer Jean-Michel Jarre’s most known tracks may have defined the sci-fi sounds of the 70s and 80s, but decades on his songs still feel like they come from the future.

It will therefore come as no surprise that the 73-year-old is preparing to enter the metaverse.

Jarre, known for his most popular track Oxygen, has teamed up with the company owned by Russian billionaire Mikhail Prokhorov, Sensorium Corporation, which is building a digital metaverse called Sensorium Galaxy.

"The metaverse and VR [virtual reality] makes me think about the beginning of cinema like the Frères Lumière," Jarre told Euronews Next.

"At the end of the 19th century, when lots of people from the theatre were saying 'they are not actors, a real actor is somebody on stage in front of a real audience', but then it [cinema] became the major art form. We know VR is in exactly the same situation today".

He believes the metaverse will not affect music festivals or real concerts and it will be the reverse.

"You're going to reinforce them [festivals and concerts] because it's a different mode of expression," Jarre said.

The artist is no stranger to the world of VR. To see in 2021, he used the technology to produce a New Year’s Eve performance in the middle of pandemic-hit Paris at the historic Notre-Dame cathedral. While there was no physical audience, 75 million people tuned in to the show.

"What is very interesting with VR is the fact that you can connect with people in that social and totally different way," Jarre said.

"There is a social dimension to VR. Despite the fact that people can be isolated for geographic reasons, social or health reasons, they can now be together, sharing the same event at the same time. And this is one of the advantages of VR".

How the metaverse could shape music

But the artist, who also has tracks on the hit game Grand Theft Auto IV, says the metaverse will help musicians develop too.

“Virtual reality is, of course, technically linked with video games, but VR should be considered as a mode of expression in itself,” he said.

I think we should not be afraid (of the metaverse), on the contrary, (we should) be quite excited by new possibilities to create in a different way.

Musicians are increasingly taking their performances to the metaverse. Pop singer Ariana Grande, for example, virtually performed on the online game Fortnite.

But Jarre will not just be performing VR concerts online for Sensorium. The company, which has also partnered with other musicians such as the DJ David Guetta, is also building Motion World.

Motion can be explained as a high-graphic, underwater virtual land that has performance spaces. The company says it will also be a space for users to reinvigorate their minds with meditation and well-being practices.

Unlike building a cartoonish VR world like Facebook’s Horizon, Sensorium wants Motion to be more life-like and it says artists are key to building that world.

"We as developers need creative minds. So, we work with Jean-Michel, work with other musicians, we work with the best creative studios to actually find the best environments that would make users fall in love with the product," said Siranush Sharoyan, director of communications at Sensorium.

"And we don’t believe that developers, who just make copies of what we have in real life, would really succeed in getting users to be engaged. We need something else, just like cinema," she told Euronews Next.

This is really exciting because it's going to give birth to a new way of operating music or producing music.

Jarre is a co-creator of Motion and will be sound engineering the virtual environment with immersive sounds. For him, to be able to be fully immersed in this digital VR world, it’s not just the visuals that count.

Sound is also key to the immersive feeling in VR, he explained, which can be created with vinyl technique and sonic surround sound.

"That's going to be very easy to get that immersion with your own headphones, without any app, without anything," said Jarre.

He believes that it will be cheaper to produce and listen to and will generate a new kind of creators, musicians, and artists that are going to write for this new medium.

"This is really exciting because it's going to give birth to a new way of operating music or producing music," he said.

For the moment, the VR and AR equipment that is needed to enter the metaverse is costly. Gaming computers are needed that can cost thousands of euros and the goggles can cost hundreds more.

Sensorium, like other companies, is working on getting the pricing down and trying to rectify the issues many users feel, such as nausea.

While the tech works itself out and aims to be available to more budgets in the future, Jarre says we should not be afraid of this new digital world.

"Technology has always dictated styles. It is because we invented the violin that Vivaldi played his music and because we created synthesisers, people like me are doing the music we are doing today. It’s the same with VR," said Jarre.

"VR is going to affect the creativity of musicians in the right way.

"We should stop having this kind of obsession to consider the future in a dystopian way. If I say, yesterday was better, tomorrow is going to be worse… this is what people have said for generations. And it's not true because the generation behind us was not that bad. Otherwise, we wouldn't be here today to talk to each other," he added.

"I think we should not be afraid of that and of course, on the contrary, be quite excited by new possibilities to create in a different way".