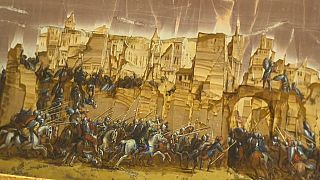 Art that would survive the invading hordes: that was the dream of 16th and 17th century painters who swapped traditional canvases for stone.

More than 60 such creations, designed to last for an eternity, are now on display at the Galleria Borghese in Rome in a show bringing together works from numerous Italian and foreign museums and collections.

The art of stone painting was invented by Italian painter Sebastiano del Piombo after the Sack of Rome in 1527, which tallied more than 30,000 casualties, saw months of looting and the theft of numerous priceless paintings.

Appalled by their loss, del Piombo began to paint on supports other than canvas, materials that would be more resistant to danger and time, and therefore capable of prolonging the life of the work.

With their colours and veined marbles, lapis lazuli and touchstones would go from serving as a canvas to becoming part of the painting itself, a transformation explored in "Timeless Wonder".

"This is certainly one of the meanings of stone painting, the eternity of art," says Francesca Cappelletti, director of Galleria Borghese and exhibition curator.

Sebastiano del Piombo's invention meant painting could last more like sculpture, a sister art with which it was often compared.

The practice of using stone as canvas also began to be widespread because it took on a symbolic value alluding, in religious paintings, to the solidity of the Catholic church, or to the concepts of eternal life and resurrection. In portraits, it referred to the moral solidity and exemplary character of the subject.

"Very early on, it was realised that even stone is fragile, that these supports can break, and in fact we have found many that were cracked or split. So, let's say that stone painting is also part of the dialectic between art and time, on how to make the beauty and works of artists last longer. Painting on stone was definitely one of the attempts," explains Cappelletti.

The Painting on Stone in the 17th century exhibition will run until January next year.

National tribute to be held for French painter Pierre Soulages

The best exhibitions to see in Europe this summer