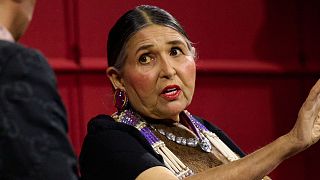 Late actress Sacheen Littlefeather was a Native American icon, an activist famous for being the first Native American woman to ever go on stage at the Oscars to decline Marlon Brando’s Oscar in 1973.

But for her younger siblings, she was a liar and a fraud.

In a new investigative report published in the San Francisco Chronicle, Rosaline Cruz and Trudy Orlandi have said that their sister, who died earlier this month, faked Native American ancestry.

"It's disgusting to the heritage of the tribal people. And it's just… insulting to my parents,” said Orlandi. “It's a lie."

Throughout her life, Littlefeather claimed both Apache and Yaqui heritage through her father. Her sisters, however, stated that their family had no links to any tribal heritage.

“My father was who he was. His family came from Mexico. And my dad was born in Oxnard [California],” explained Orlandi.

Speaking about her sister’s “fraudulent” identity, she added: “It was more prestigious to be an American Indian than it was to be Hispanic in her mind.”

The article’s author Jacqueline Keeler writes that Littlefeather’s birth name was Marie Louise Cruz, and that she found no evidence of any connection that her father, Manuel Ybarra Cruz, had to Native American ancestry.

Orlandi and Cruz said that their decision to go on the record and speak out against their sister stems from the desire to clear their parents’ names and reputations.

Littlefeather had previously affirmed that she grew up in poverty and that her father was abusive.

"My father was deaf and he had lost his hearing at 9 years old through meningitis," Cruz explained. "He was born into poverty. His father, George Cruz, was an alcoholic who was violent and used to beat him. And he was passed to foster homes and family. But my sister Sacheen took what happened to him."

The sisters added that they found it troubling seeing their sister "being venerated as a saint" after the Academy officially apologized to her for the "abuse" and "emotional burden" that she carried following her appearance at the Academy Awards.

"Sacheen did not like herself," Orlandi said. "She didn't like being Mexican. So, yes, it was better for her that way to play someone else."