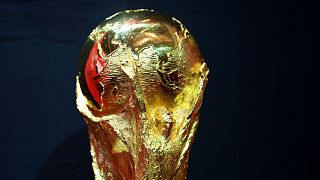 Awarded to the winning team of the FIFA World Cup held once every four years, the World Cup trophy is undoubtedly one of the most iconic and coveted prizes in sport.

The trophy as we know it today was introduced at the 1974 tournament in West Germany, and depicts two human figures holding up the Earth.

It was designed by Italian artist Silvio Gazzaniga, who worked for the Bertoni manufacturing company, located on the outskirts of Milan.

While the original 18 carat gold trophy made by Gazzaniga belongs to FIFA and is rarely exhibited, the GDE Bertoni factory is still tasked with producing brass gold-plated replicas of the trophy every four years for the winning team.

How is the trophy made?

As Salvatore Iannetti, the current production manager of GDE Bertoni, explains, the factory prides themselves on their trophies being "completely handcrafted".

"For us, it is a source of prestige and pride to still be able to work as they did so many years ago," he says.

The process starts with the smelting - brass metal is poured into a mould (shaped in the original design of the trophy) to produce a plaster cast.

Manual chiselling and hammering is then applied to refine the intricate details of the trophy, such as the two human figures.

Then, in order to make the trophy nice and shiny, it goes through ultrasonic cleaning, where it is submerged in a degreasing bath, before being gilded in a galvanic bath several times.

The nearly-complete trophy is later coated in a thin layer of zapon varnish and attached to its malachite green marble base.

After drying, the trophy is finally considered complete.

For Iannetti, the painstakingly long process is all worth it when he sees the cup he helped create being lifted by the winners of the World Cup.

The trophy manufacturers are now busy preparing for the Qatar World Cup, which is set to take place from 20 November to 18 December.

Check out the video above for a sneak peek inside the World Cup trophy factory.