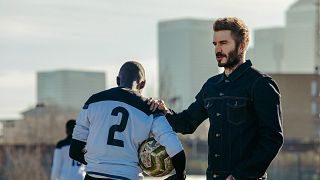 Step aside Ted Lasso and Ryan Reynolds, it's David Beckham's turn to breathe new life into a down and out football team.

Disney+ have released the full trailer for 'Save Our Squad', an upcoming series which follows England football royalty and former Manchester United star David Beckham, as he returns to his East London roots to mentor Westward Boys, a young team struggling and at the bottom of their league.

In the series, David Beckham mentors the squad, spending time with the players and their families, learning about their lives and talking to them about life beyond the pitch.

The recently released trailer shows the squad meeting Beckham for the first time, with one member of the team bantering with the football legend on his missed penalties.

To the surprise of the Westward Boys, the free kick maestro then reveals he played in the same league as them when he was a young boy.

'Save Our Squad with David Beckham' is co-produced by the BAFTA winning production company Twenty Twenty and Studio 99, the production studio co-founded by Beckham.

The series premieres exclusively on Disney+ on 9 November 2022.