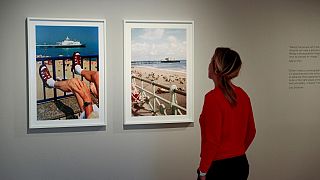 Immerse yourself in photographs of everyday life taken by amateurs and by British photographer Martin Parr.

Parr's new exhibition in the French capital pairs images of his own work from the 'Déjà View' book with those from his Anonymous Project works - a collection of amateur photographs from around the world that he's been collecting for several decades.

"I'm also interested in just ordinary people in the way that the pictures from the Anonymous Project show ordinary people doing ordinary things," said Parr. "So that is a big part of my work ethic, to show the things that maybe people would overlook. What's it like in the supermarket? What's it like you know, at a beach resort? These are subjects that are close to my main work. And it's often the case with the Anonymous Project as well."

The 70-year-old artist is known for his kitsch and colourful aesthetics. Sixty-four photographs have been picked to form duets and they highlight diverse settings from across Europe and America featuring holidays and celebrations, and capture stereotypes and society which show our funny quirks in our everyday lives.

The 'Déjà View' exhibition is at the Magnum Gallery in Paris until November 12.