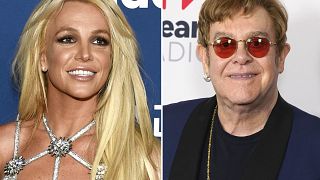 Spears and John have collaborated for the first time, creating the slinky, club-ready single 'Hold Me Closer'.   -   Copyright  AP/Copyright 2022 The Associated Press. All rights reserved.
By Giulia Carbonaro  •  Updated: 27/08/2022

After finally freeing herself from a 13-year conservatorship that saw her professional and personal life being completely controlled by her father, Britney Spears is back with her first recording since 2016 - and the fans and critics are raving.

When six years ago Spears released her ninth album ‘Glory’, not many would have expected the artist to suddenly disappear from the music scene for years. Between 1999 and 2001, the ‘Princess of Pop’ released a new album every year (‘...Baby One More Time’ and ‘Oops!... I Did It Again’ are still among the best-selling albums of all time), and until 2016 the longest she had spent working on a new album had been 5 years between 2003 ‘In The Zone’ and 2007 ‘Blackout’.

But again, in 2016 not many people had any idea of what was really going on in Spears' life following her psychological breakdown in 2007. What the world knew is that amid a divorce, a fight for her children’s custody, a death in the family and problems with substance abuse, Spears had had a very public meltdown at a hairdresser in LA and shaved her head in full view of photographers and that a court had decided she would be safer in the hands of her family.

Only later would fans rally around the star to get her out of the conservatorship that had her father Jamie decide over her career, business affairs and finances, as well as personal life for over a decade.

Only in 2019, when Spears announced an “indefinite work hiatus”, the ‘Free Britney’ movement became mainstream. Fans’ suspicions over the singer’s conservatorship were confirmed in June 2021, when during testimony to court Spears spoke of being a “slave” earning millions for those in charge of her conservatorship, including her father, and not even being able to decide to marry or stop taking birth control.

After Spears was finally freed of the conservatorship in November 2021, it was unclear whether the singer will ever even perform again.

“Not doing my music any more is a way of saying ‘f**k you’,” she wrote on her Instagram account, now deactivated.

But now she’s officially back, with the support of one of the biggest living music icons around, Elton John. On Friday, the two dropped their single ‘Hold Me Closer’, a piece blending some of John’s previous hits, including ‘Tiny Dancer’, ‘Don’t Go Breaking My Heart’ and ‘The One’.

Talking to the Guardian about Spears’ vocals, John said “she sang fantastically”.

“Everyone was saying they don’t think she can sing any more. But I said, she was brilliant when she started so I think she can. And she did it, and I was so thrilled with what she did.”

It was a “big deal” for Spears too, as she wrote on Twitter.

"Okie dokie … My first song in 6 years”, Spears wrote. “It’s pretty damn cool that I’m singing with one of the most classic men of our time. I'm kinda overwhelmed...it's a big deal to me.”

From bubblegum pop to the disco-tinged reworking of a classic: The evolution of Britney Spears

Over a 20-year spanning career, Spears has constantly renovated herself, growing from a pig-tailed teenager dancing in the school halls into a mature, edgier and much more confident woman who once famously held a massive snake on stage, to the discontent of PETA.

Leaving behind the early fame of Disney’s ‘Mickey Mouse’s Club’, Spears immediately step into global stardom with her debut album and lead single ‘...Baby One More Time’, a song that topped the chart in at least 22 countries when it was first released and that you can still hear around wherever Millennials are in charge of choosing the playlist.

Spears is iconic with her pig-tails and school uniform, though part of the notoriety of her looks is owed to the combination of misogynistic and male gaze-y scrutiny she was under at the time, and for years after that.

Already a year later, in 2000, Spears had abandoned the school references for a more mature, confident and sleek look with ‘Oops!... I did it again”. But it’s only in 2001 with ‘I’m A Slave 4 You’ that Spears officially transformed from the bubblegum pop princess into a confident queen of sublime pop - - a metamorphosis signalled by heavy beats and sweeter, whispered vocals.

With 2004 ‘Toxic’, Spears presented another version of herself with an absolute banger that sampled an 80s Bollywood musical and combined it with surf guitars and synth. The entire album released that year, ‘In The Zone’, combines dance, trip hop and hip hop.

In 2007, in the midst of the mental health crisis which had already started becoming visible in public, Spears published ‘Piece of Me’, a dance number with electro synth riffs which says a lot about how the singer was feeling about being constantly in the public eye.

After the conservatorship took over her career, many said that Spears’s evolution was stifled - - but now the singer has the opportunity to once again decide on her production.

“I want to be fearless like when I was younger and not be so scared and fearful,” Spears wrote on Twitter.

Britney's speech drew public support - but it might not help legally