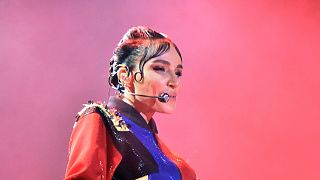 Turkish pop star Gülşen has been arrested on suspicion of "inciting hatred and enmity" after she made a joke about religious schools.

The 46-year-old singer-songwriter was taken away for questioning from her home in Istanbul and was formally arrested late on Thursday before being taken to prison pending her trial.

The charges relate to comments she made during a concert in Istanbul in April when she quipped that one of her musicians’ “perversion” was because he went to an Imam Hatip religious school.

A video of the singer making the comments began circulating on social media recently, with a hashtag calling for her arrest.

But other online users have expressed anger at her arrest. Critics say the move is part of the government's efforts to consolidate religious and conservative support ahead of next year's elections.

Kemal Kılıçdaroğlu, the leader of Turkey’s main opposition party, called on Turkey’s judges and prosecutors to "release the artist now".

Gülşen -- whose full name is Gülşen Çolakoğlu -- has already been the target of Islamic circles for her stage outfits and support for the LGBTQ community.

She has issued an apology on social media for the offence caused but said her comments were seized on by people who want to polarise Turkey.

During her questioning, Gülşen rejected accusations that she incited hatred and enmity, telling court authorities that she had “endless respect for the values and sensitivities of my country,” according to the state-run Anadolu Agency.

But a spokesperson for the ruling AK party stated on Twitter that "inciting hatred is not an art form" and suggested that Gülşen's actions were "a hate crime and a disgrace to humanity".

Turkish President Recep Tayyip Erdoğan and many of his party members attended Imam Hatip religious schools in Turkey, and the government has pledged to increase their number to raise a "pious generation".

The schools were initially intended to prepare children to become Muslim preachers.