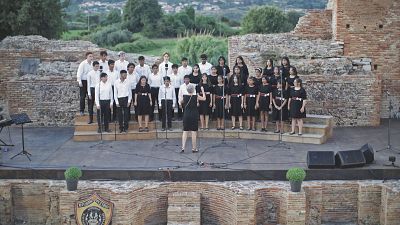 Alena Pyne moved from Ireland to Qatar with her family in 2011. Alena's three children were passionate singers and she wanted to enrol them in a local choir to help them develop their voices. She searched high and low throughout the local community but to no avail. Alena took it upon herself to set up Qatar's first youth choir.

"Qatar is a wonderful place where if something is absent, you receive great encouragement to try to have a go, so that's what I did," Alena tells Scenes. In 2013, the Qatar Youth Choir opened its doors to boys and girls aged 14 to 18. Two years later, she formed the Qatar Junior Choir for the younger children in Doha.

A melting pot of culture

Qatar's peninsular is a melting pot of cultures, with over a hundred nationalities making up 88 per cent of the population, leading the choir to attract children from all over the world.

"Our choir is immensely diverse. I think it's one of the most diverse choirs in the world," says Indian-born alto leader, Milonee Bera. "I would say that over the seven years I've been with choir, there must have been more than 50 if not 70 nationalities coming and going," adds Belgian native bass leader, Mattias Van Aksenoy.

The choir performs music in multiple languages. They specialise in folk songs from around the world, including ancient Arabic songs. "The diversity lets us experiment more because we have such different cultures integrating. You can see the differences and how their culture taught them music and how they perceive music. Which is something that really shows how important music is in our culture," says bass singer Rehan Valsan Pillay.

With a motto of ‘Carpe Diem’, the choir are always open to new challenges. They have performed nationally and internationally. In 2017, they won the youth section of the inaugural Qatar National Music competition. Over the years, they have toured extensively across Europe. Visiting countries like Germany, Latvia, Croatia and Austria. In 2019 they represented Qatar at the World Choral Expo in Lisbon, Portugal.

"We got the opportunity to perform with the Vienna Boys Choir, which is the oldest choir in the world. To get these opportunities, we had to get selected. We had to work hard. We had to prove ourselves to the world," says alto singer, Milonee.

Qatar Youth Choir participated in the International Choral Festival of Preveza in July 2022. The festival includes numerous concerts held in idyllic locations, such as the historic Ancient Auditorium of Nikopolis and the seaside fortress of Preveza. Over 400 choirs from around the world performed on the Greek city's stages during the annual event.

At the week-long festival, the teenagers performed in a variety of concerts. From formal competitions to open-air shows to street festivals. As a result, the choir came home with three awards, including the prize for best stage performance.

"Seeing all the people of Preveza, enjoying the music. Seeing the locals shout and be excited for the festival that's been going on for 40 years is truly a unique experience, one that we will never forget," says Alena's son and tenor singer, Emmet Pyne.

For many children, the choir has been more than a place to develop their voice. "Being a member of the choir has definitely changed everything in me. It's changed the way I talk. It changes the way I behave with people. The choir brings a sense of team spirit into your life," says bass singer Keith Lobo.

"Qatar Youth Choir has been the centre of my personal growth over the last seven years. I have met all the people I know, all the friends I hang around with. All of the main events I've had in my life have resulted from being part of the choir," adds Mattias.

"What gives me the greatest joy as a choir leader is watching the singers grow in stature, grow in confidence, finding their voice," concludes Alena. For many leaving Qatar, the choir is not the end. Many of Alena's students have been awarded scholarships to prestigious European and international music schools to further their musical studies.