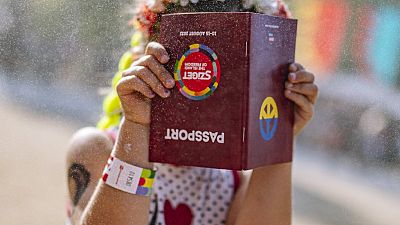 After two years of silence, the small island on the Danube River in Budapest welcomed back the festive crowd of Sziget Festival.

From last Wednesday (10 August) to this Monday (15 August), around 450,000 visitors - known as “Szitizens” - headed to the Island of Freedom, also nicknamed the “Festival Republic.”

And if it was a real republic, there would be plenty of reasons to apply for citizenship…

Standing up for good causes

Sziget Festival has always been a tolerant, safe space. The venue Magic Mirror promoting LGBTQ+ rights and culture suffered several attacks during the festival’s history, but organisers never backed down. Sziget launched its Love Revolution campaign in 2017 to speak up for the values they promote, like acceptance, tolerance, and protecting the environment.

As Tamás Kádár, main organiser of the Sziget said in a press conference in the middle of the festival this year, Sziget is a “double island”. It is an island in the literal and figurative sense, as it’s an island in Hungary, where it is getting more and more important to protect these values. This is why Sziget chose to send a clear message and stand up for Ukraine, urging festival goers to support Music for Ukraine and proposing a colourful programme with concerts, photo exhibitions and guests from the war-torn country.

Sziget was also one of the festivals where Russian artists were not excluded.

“In culture, it does not make sense to declare an embargo,” Kádár told Euronews, citing the example of Russian novelist Lyudmila Ulitskaya, who is well known for her stance against the Russian invasion.

You can bump into people from around 100 different countries on the festival grounds. Even if most of the festivalgoers are from Europe or English-speaking countries, the number of different nationalities makes it a bit like a global village.

It’s the best way to forget about prejudices, learn more about people, and when you are on the Island of Freedom, no one judges.

As Sziget’s mission was never just about entertaining people but also broadening its visitors’ horizons, there is also a place dedicated to NGOs, where everyone can learn more about important social questions - from religion to protecting the environment.

Blocking out outside noises

When Sziget started, Hungary was a young democracy, full of hope, on its way to joining the European Union. In 2022, the world feels like a darker place.

Sziget admits that the past two years were extremely hard for them too, and this year, they had several difficulties preparing the festival - sourcing materials coming from Ukraine to build venues and stages; inflation; the devaluation of the Hungarian forint; the lack of workforce.

Regardless, the festival managed to keep the quality and diversity of acts, as well as maintain that feeling that as soon as you enter the island, all your troubles can be left behind.

Giving back as much as possible

Like in real republics, the citizens play an important role. The same goes for Sziget and its “Szitizens.” People take care of each other and respect one another. And that goes for nature too.

Sziget has a candid stance when it comes to addressing its large carbon footprint. Not all festivals are as forthcoming.

For years, they have been trying to lead the way in reducing its footprint by introducing reusable cups and banning plastic straws. This year, they invited guests taking a plane to Budapest to join the festival’s carbon compensation programme. Campers are also invited to take a vow to clean up any waste before they leave the site.

Who knows? Maybe after one week spent on this island, “Szitizens” going back to their home countries might just bring some of the values of this republic with them…