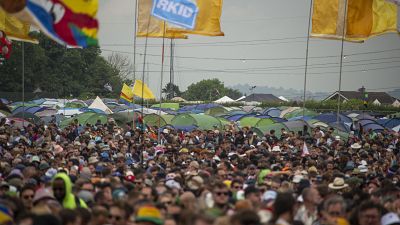 With Billie Eilish and Paul McCartney the youngest and oldest Glastonbury headliners, what other Glasto firsts are there?   -   Copyright  Joel C Ryan/Invision
By Tim Gallagher  •  Updated: 05/07/2022

The world famous Glastonbury Festival is taking place in the UK this weekend and will feature both its youngest and oldest headliners ever, as gen-Z superstar Billie Eilish shares top billing with ex-Beatle Paul McCartney.

Eilish, who at the age of 20 has already won an Oscar and several Grammys taking her halfway to being an EGOT, will grace a stage which has hosted some of the world’s most beloved musicians on Friday night.

Meanwhile, McCartney will take to the Pyramid Stage for the first time since 2004; at 80-years-old the appearance will make the singer the oldest-ever solo headliner.

Over the decades there have been many other record-breaking acts on the festival's stages. Let's take a look at a few other Glastonbury firsts...

While there’s hardly been parity between the genders on the Pyramid Stage it has hosted some of the world’s best-known female artists.

Suzanne Vega was the first woman to headline Glastonbury in 1989, 14 years after the event's first edition. A folky American singer-songwriter, Vega, wowed crowds with her guitar-led tunes and set the standard for what was to come.

Since then the festival has seen many women grace the stage but most notably in recent years was Beyonce in 2011, Florence and the Machine in 2015, and Adele in 2016.

With Eilish headlining in an era where women arguably dominate the charts like never before there is sure to be more phenomenal female talent on stage in the future.

Although Glastonbury often attracts criticism for being a white, middle-class affair the festival does have a long history of Black performers.

In 1983 Curtis Mayfield was the first Black man to play Glastonbury and the next day UB40, with Black members Astro and Earl Falconer, also played for the crowd.

The following year the Jamaican reggae group Black Uhuru took to the stage, with member Puma Jones becoming the first black woman to play the festival.

Meanwhile grime artist Stormzy made history in 2019 as the first Black British solo artist to headline the festival.

Given the sexual ambiguity of glamrock stars like Lou Reed and David Bowie who were both early performers at Glastonbury, it’s hard to pin down the festival’s first ever queer performer.

However there are notable queer artists who have wowed the Glasto crowds and given a powerful message to festival-goers.

Queer icons the Scissor Sisters played in 2004 and unforgettable synth-pop duo the Pet Shop Boys were on stage in 2010 and 2019.

Notable pansexual and genderqueer Christine and the Queens played in 2017, while Years & Years frontman Olly Alexander shocked crowds with a thought provoking performance in 2019 in which he displayed homophobic messages he’s received on social media on stage.

Glastonbury is also home to the legendary NYC Downlow, a queer club that attracts thousands of LGBTQ+ partygoers every year.