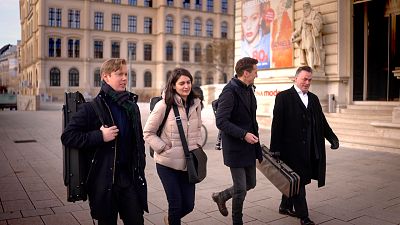 The Vienna Philharmonic is a legendary orchestra renowned for its unique sound and famous sweeping waltzes played at its New Year's concert.

But what makes it so special? What’s the secret behind the Viennese sound?

"The special thing and somehow what the whole world envies us for is the rhythm and how we sense it. The anticipation of the second note that comes a bit earlier, and the third note that comes a little later. And that’s combined with a beautiful melody that’s been tailor-made for our orchestra,” says the Vienna Philharmonic's First Violin and Chairman, Daniel Froschauer.

There is this feeling you’re dancing the waltz in circles, always in movement. I’m not speaking from experience because I have two left feet, but I have seen and heard how beautiful it is.

Benjamin Morrison regularly takes his instrument to the violinmaker. For the New Zealander, care and precision are vital in maintaining the instrument’s rich sound.

“I notice this again and again in sound settings, especially when musicians from the Vienna Philharmonic come to me, that the focus is on the quality of the sound, on a richer sound and a warm timbre,” Violin Maker Matthias Wolff told Musica.

“You can change the sound to an incredible extent with some small things. First of course the bridge, where it’s positioned, how much is cut out of it. There are so many elements just with the bridge, that can have a huge effect on the sound,” Wolff adds.

Shaping the sound through the way a musician plays is key for Austrian clarinetist Daniel Ottensamer and French bassoonist Sophie Dervaux.

"It’s very difficult to pin it down to one thing. It has a lot to do with tradition, of course, but I'm not sure if it’s simply just the sound," says Ottensamer.

Explaining the dark quality of the Viennese sound, Ottensamer adds, “What always strikes me is the subtlety in the sound. You try not to play too directly in certain passages. Notes gradually rise and don’t always have a clear beginning."

Some of the orchestra’s instruments are quite different from those played elsewhere in the world.

“The [Viennese] clarinet is built with a little bit more wood. It’s a little thicker, more voluminous, and therefore creates a darker sound. This brings us to the Viennese sound itself. This sound blends particularly well with the other instruments in the orchestra,” says Ottensamer.

In Vienna and only in Vienna goatskins are used.

But the sound they produce is so distinctive, that it has become the focus of academic research.

At the University of Music and Performing Arts in Vienna, Gregor Widholm and his team unveiled the secrets behind one of these unique instruments, the Viennese Timpani.

“In Vienna and only in Vienna goatskins are used. These goatskins have a special feature. Along the spine, the skin is particularly thin and therefore certain vibration modes, that are formed, are much stronger."

Explaining in more detail, Widholm adds, "You can see very well here in this 3D graphic, how after the beat the rhythms decay evenly compared to the international kettledrum with the plastic skin which has more irregular frequency intervals between the vibration modes. This means that the sound structure of the Viennese timpani has a more musical tone, while the international timpani is more percussive."

When the sounds of the instruments in the orchestra melt together - this is the Viennese sound for me.

"It's a sound that on the one hand allows me rhythmic conciseness, but always blends homogeneously into the orchestral sound. You can always feel this heartbeat. When the sounds of the instruments in the orchestra melt together - this is the Viennese sound for me. And there are moments in the concert when I have the feeling that this sound wraps itself around my chest like a warm coat and touches my heart and soul.”

The perpetual quest for excellence

Since the 19th century, the orchestra’s perpetual quest for excellence has been forged at the orchestra's home, the Vienna Musikverein.

The Golden Hall of the Musikverein is our home and the sound that we produce here is simply our sound.

Describing how the concert hall has helped shape the orchestra's distinctive style, Froschauer says, "That sound - we mustn't forget - if you were in our orchestra in 1875, you would have played at the opera with Verdi. And then you would have gone to the Musikverein and played with Richard Wagner – and this all had an influence on our sound. And this sound has always remained. We pass it on from generation to generation without talking about it.”

To stand in front of the Vienna Philharmonic and create music, that’s really an exceptional moment.

Legendary maestro and pianist Daniel Barenboim’s relationship with the orchestra goes way back.

“The first time I played with the orchestra was in Salzburg sometime in the 60s. I was sitting there at the piano, surrounded by 60, 70 musicians who played as a community. It was about being together and creating together. And this was really a dream.”

But what does it feel like to be a part of one of the great orchestras that is recognised throughout the world for its unique style?

“There is a special feeling here when you tell people that you are a musician, they take you very seriously. It’s not like elsewhere where you say: ‘I’m a musician’, and people ask you ‘and what else do you do for a living?’” Dervaux says laughing.

Agreeing, Ottensamer adds, "Of course, Vienna, is as we all know, a music capital worldwide and this presence, this importance, which I would say music has here, but also the city’s culture as a whole is extraordinary, and because of that, you just have the feeling that you're doing something very special because it's so important here."

Summing up Barenboim tells Musica, "Vienna and the whole of Austria are proud of the Vienna Philharmonic and I think this is very important.

“The orchestra is unique. When they play they become one and that shapes everything...and that’s the most important word - together - spiritually, together.”