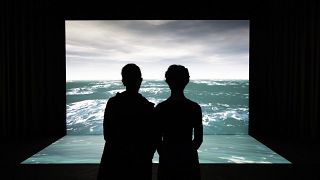 Belong, imagine, engage. These are the calls to action of Our Time on Earth, an exhibition celebrating the power of creativity to advance the conversation around the climate emergency.

Running until 29 August 2022 at London’s Barbican Centre, Our Time on Earth invites visitors to take a global perspective on how we relate to the planet, and underlines the need to be creative in the fight against climate change.

Across 18 works from 12 countries, the show sees environmental activists, artists, designers, ecologists, engineers, scientists, architects and others collaborate to explore diverse ways of existing in relation to the natural world.

“There is no silver bullet, no one approach to counteract the damage that has been done to our shared planet. Acknowledging the intersections, however, and combining experience and expertise – that’s when the magic happens,” guest co-curator Caroline Till of creative agency FranklinTill tells Euronews.

Our Time on Earth takes visitors on a journey across three interconnected sections – entitled Belong, Imagine and Engage – designed to elicit wonder for the planet and an understanding of our place in the biosphere as one species among millions, while inspiring us to act.

The journey begins with an immersive video installation, Sanctuary of the Unseen Forest. Based on their own field research, digital art collective Marshmallow Laser Feast and Bio Leadership Project co-founder Andres Roberts reveal the unseen life of a huge Ceiba pentandra tree in the Amazon rainforest, showing nutrients pulsing through the tree and rivers of carbon pouring into the soil.

Sanctuary of the Unseen Forest aims to engender a sense of awe and humility, but equally connection; the work illustrates how soil and trees play a crucial role in capturing and storing carbon emissions and releasing oxygen.

“We live each day so quickly, and through a strange kind of tunnel vision – we put other people and nature outside of our lives,” Roberts says, “But the reality is that we are profoundly interconnected to all other lives. This is simple science. We breathe in what trees and plants breathe out.”

Imagine, the show’s largest section, presents visions of an alternative future. First shown at the Venice Architecture Biennale in 2021, Superflux's Refuge for Resurgence is a dinner party with a difference: a table set for 14 different species, each a valued participant.

“Multiple species gather as equals to celebrate ecological interdependence in a new world – one where we can all prosper with resilience, adaptation and wild hope,” say Superflux.

Digital Direction Studio DVTK and the Institute for Global Prosperity (IGP) at UCL also focus on interdependence between human and non-human beings; their 3D interactive installation Sharing Prosperity takes the form of a game, in which players choose to embody characters such as a river, human or bird. Whichever they select, their character serves as both a consumer and resource.

This interconnectedness might not be such a revolutionary idea. A number of works show the ways that many Indigenous communities already live in symbiosis with nature and explore how their knowledge could be incorporated into climate resilience strategies.

“Through conversations with the Khasis, Subak and Ma’dan communities, The Symbiocene invites us to rediscover the human ingenuity of the ancient past, to find a future in harmony with nature,” says designer Julia Watson. Among the concepts presented is a flood resilience strategy based on creating floating islands from layers of reed, a technique used by the Ma'dan when building their homes in the marshes of southern Iraq.

The final phase of the exhibition, Engage, is decidedly practical. After showcasing a number of innovations in the fashion world – making mushroom “leather”, for example, the exhibition puts the spotlight on the efforts of grassroots organisations and activists from around the world.

Keralan architecture firm Wallmakers have transformed flood-damaged handloom fabric into seats and screens to furnish the space where video series Stories of Change is presented. These films, by environmental arts platform The Earth Issue, tell the stories of individuals and communities successfully making change, and demonstrate a notable (and unusual) feature of Our Time on Earth: optimism.

Rather than emphasising an impending climatic catastrophe and filling visitors with fear, guest curators Kate Franklin and Caroline Till wanted to move away from “a sense of shame, helplessness and even paralysis in the face of overwhelming reality” says Till.

“The conversation about the climate crisis until this point has focused on depicting the scale of the problem we’re facing. Rather than march to a drumbeat of doom, we wanted Our Time on Earth to carve out space to imagine a constructive way forward,” she says.

After all, she adds, “we’re in this together”.

Our Time on Earth runs from 5 May – 29 Aug 2022 at The Curve, Barbican Centre. The show is curated by Barbican International Enterprises and co-produced by Musée de la civilisation in Québec City, Canada.