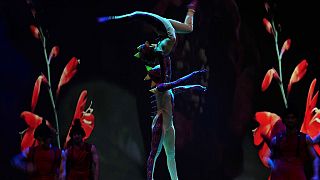 Members of the Circus Theatre Elysium of Kyiv were abroad in Italy when Russia invaded their home country on February 24. Now the acrobats, dancers and organisers of the glittering troupe are trapped in a strange land, on a seemingly never-ending "Alice in Wonderland" tour.

With no prospect of safely returning home, the performers resolved to keep trying to work and to send money back home, extending their run until the end of June.

The response from theatres across northern Italy was overwhelming. The Elysium circus's show is booked from Assisi in Umbria to Ferrara in Emilia-Romagna, while the town of Reggia Emilia rallied to find them temporary accommodation and medical support.

Performances have sold out night after night to warm reception from the Italian public.

After the performance in Pistoia, Tuscany, the curtain opened again to reveal the performers onstage holding the blue and yellow flag of Ukraine. They were met with a standing ovation and shouts of "Slava Ukraini" ("Glory to Ukraine").

Behind the scenes, however, the circus performers are struggling with anguish over what is happening to their country and guilt and fear for their families back home.

"It is very hard to work and dance on the Italy stage because we know in our country now is war," Oleksandr Bandaliuk, who plays the Mad Hatter, told AP while his wife painted gold glitter into his purple beard. "We can't go to Ukraine because in my house now is Russian soldiers."

Some members of the troupe have fortunately been reunited with their families. After the invasion, the show's executive director Oleksandr Sakharov and Italian producer Roberto Romaniello launched a fundraiser in Italy and managed to bring about 50 people - 10 of the performers' families - to Italy.

Producer Roberto Romaniello added, "we have four to five dogs, a cat, and a grandmother, who is [a] 79-year-old babushka, who is the matriarch of all of us, the grandmother of the company."

In addition to bringing over some of their families, the circus performers feel it important to keep working so they can provide financial assistance for the war effort.

For dancer Anastasia Beznosenko, the backstage effort of getting into outlandish outfits - wigs, corsets, top hats and costume makeup with pearls and glitter - help to push wories out of her mind.

Nevertheless, she said, "It is very difficult to smile and to be onstage in a good mood, and to think about your family, your relatives who are in danger now."

On the ground in Mykolaiv, a shelled city in Southern Ukraine