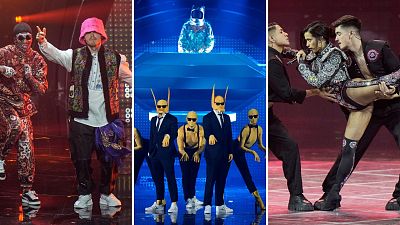 After Thursday's second night of semi-finals, the list of 25 participants for this weekend's Eurovision 2022 competition is set.

The Eurovision Song Contest, which started in 1956, is a bit like marmite - you either love it or hate it.

So we spoke to five Eurovision super fans to find out why they're so obsessed with the competition and why they think everyone should be watching the final this year.

Check out the video above to hear what they had to say.

A wide range of music

"I'm a big fan of music and I love to hear music from different cultures, different faces and different places, and I love the idea of lots of different unions and countries coming together for one massive celebration of music," explained Letts, superfan and host of the YouTube channel, Eurovision Feels.

While pop music and emotional ballads generally tend to dominate the Eurovision Song Contest, this year you can expect to see dozens of other genres of music.

Another factor why many people love Eurovision's music is that it offers a platform to discover new and lesser-known artists.

"At Eurovision you can really discover a lot of artists that you would never find otherwise," says Urika, a super fan from Belgium.

A celebration of diversity

Another one of the reasons why many people love Eurovision is because it is a celebration of diversity. The contest continues to push boundaries and represent artists regardless of their race, sexuality, gender and culture.

Famously in 2014, Conchita Wurst, a bearded drag performer from Austria won the contest with her song 'Rise Like A Phoenix'.

The show has long been embraced by the LGBTQ+ community, who found a welcoming home in its message of unity.

'I love just seeing the mass of representation from different styles of music, different languages, different people coming together to show what they can do', says Jude Kennedy, a Eurovision super fan who runs his own Eurovision YouTube channel.

A night of entertainment and partying

The Eurovision Song Contest knows how to put on a show.

Each year it boasts an impressive production - with high-tech staging, immaculate choreography, blazing pyrotechnics, all shown to audiences through a live broadcast.

The show's live party atmosphere brings in millions of people from all across Europe and the world.

"There's just something fun and so unique about it, and so Europe as well, that makes it feel really special and it's like nothing else", explained Toy and Goy, who run the Eurovision themed YouTube channel, ToyGoy.

"It's just fun and there is nothing that compares to the drama of the results. As soon as the results start coming you're sat there like, 'This is it. This is what it's all about'," says Goy.

Urika believes the best way to experience Eurovision is to watch it with friends.

"It's just a big party. If you can I would just invite your friends and have a party and watch it together," says Urika.

"Live in the moment, embrace the wacky, embrace the weird and don't take it too seriously," explains Leets, the host of the Youtube Channel, Eurovision Feels.

Which country is likely to win this year?

As always Eurovision fans are divided on who they think will win the contest this year.

However, bookmakers predict Ukraine's Kalush Orchestra as the favourite to win.

With Russia banned from this year’s contest and the rest of Europe watching Putin’s invasion of Ukraine with horror, it’s easy to see why. But the superfans we spoke to think the song stands on its own merits.

"That song (Stefania) gives me goosebumps every single time I listen to it. Just the way they rap and sing and bring so many ethnic Ukrainian pieces of art into their performance grips me every time and it's definitely one to look out for," says Jude Kennedy.

"Stefania" by Kalush Orchestra was the most-watched Eurovision entry on YouTube ahead of the final and often the number of streams a song has before the competition is a good indication of how the country will perform.

Toy and Goy are both rooting for Spain's Chanel to win, after a disappointing run of past Eurovision results for the country.

"Both of us really, really love Spain. Spain's song this year is a banger!" they said.

The fun and games kick off on the evening of Saturday 14 May, including a performance from last year's winners Måneskin.