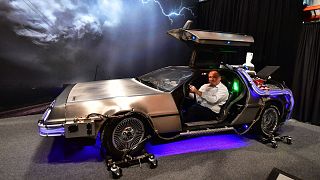 More than 1,800 iconic items from some of Hollywood's biggest movies are going under the hammer next month in Los Angeles, at an auction hosted by Propstore.

Another standout is a DeLorean car from the Back to the Future franchise, which the auction catalogue describes as "fully operational, registered and insured with current mileage of 22,532".

"Many of the objects come from collectors, but also from the studios themselves, or they may have belonged to people who actually worked on the filming of the movies at the time," said Propstore's Chuck Costas.

Other cinematic goodies expected to be snapped up by film fans include Indiana Jones' grail diary, valued at up to $80,000; an expletive-laden wallet carried by Samuel L. Jackson in Pulp Fiction, valued at $50,000, and Dan Aykroyd's Ghostbusters costume, which you could own for $35,000.

Cinema buffs can also get their hands on the boxing shorts worn by Will Smith in Ali (2001), which are expected to sell for $2,500.

An animatronic Gizmo used in the filming of Gremlins 2 is probably the cutest lot available, with an expected hammer price of up to $120,000. Just don't feed it after midnight.

The auction takes place online and live in Valencia, near Los Angeles, from 21 to 24 June.

Check out the video above for a look at some of the most notable items going under the hammer.

'Dreamachine': Is it possible to see art with your eyes closed?