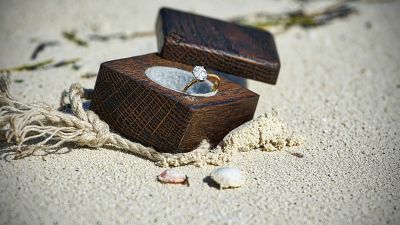 Another day, another round of internet discourse on a dating show.

This time it’s ‘The Ultimatum: Marry or Move On’ the newest Netflix dating show premise in which contestants are selected because one of them wants to get married and one of them doesn’t; this being the ultimatum in question.

On ‘The Ultimatum' we follow six couples as they briefly split up and move in for three weeks with the partner of another couple in the same situation, in the hopes that they will either realise they actually want to marry their current partner or see that they like someone else and should end the relationship. Would couples therapy have been a better choice? Who can say.

Netflix’s latest dating fare follows a strong tradition of attractive young contestants engaging in boozed up, pool side flirtation with the added gimmick that this time their current partners are jealously eyeing them as they engage in their own wildly inappropriate date at the Tiki bar.

As gimmicks go it isn’t the worst, although the addition of po-faced presenters urging the contestants on with sincere platitudes means it lacks the tongue-in-cheek quality of, for example, ‘Too Hot to Handle’.

But while luring fame-hungry people with poor judgement onto shows that sound like they were pitched by producers at 2 am in a smoking area doesn’t actually seem that hard, the need for a flimsy reason to bring together beautiful young things for us all to ogle is ever-pressing.

So while no doubt as we speak producers are thinking up new ways to give dating a fresh look, here we explore the mind-boggling and bizarre shows you won’t admit you’ve watched.

The show that asks its contestants to bare it all and asks its audience to bear many bizarre assertions that this is the best way to get to know someone, ‘Naked Attraction’ is currently aired in eight countries including Finland, Russia, Poland, Italy and the Netherlands after starting out in the UK.

The premise is fairly simple, one contestant looking for love chooses from several other contestants whose naked bodies are slowly revealed (genitals first) before in the final two the chooser themselves removes their clothes.

It may seem as though no one but the most enthusiastic exhibitionist would choose to do this but with the British version now in ninth series, it seems there’s no shortage of them.

After decades of fighting for their rights, here gay men choose to go back into the closet so they can fight to win a cash prize by tricking a woman into thinking they want to be in a relationship with her.

Were the contestants engaging in sponsored gaslighting of the highest order? Almost certainly.

But did that stop producers in the UK, US and Australia commissioning seasons? No! The UK one was even presented by now-internationally famous Jameela Jamil.

I Want to Marry “Harry”

A post shared by I Wanna Marry "Harry" (@marryharryfox)

Long before the tabloid press had Meghan Markle in their crosshairs, Prince Harry was a figure of fun known for riotous drinking, dressing up as a Nazi for a joke, and…participating in a dating show? Well not quite.

In ‘I Want to Marry “Harry”’ 12 naive American contestants were tricked into thinking they were competing to marry someone in line to the throne of England. However, the man they were wooing was in fact Matthew Hicks, an environmental consultant and Prince Harry look alike.

The series was pulled before it finished in America due to poor ratings but the full show was aired in the UK, Mexico, Argentina, and Australia.

Seemingly discounting the entire furry subculture, this premise makes over hopeful singles in hideous makeup to turn them into anthropomorphised animals and other creatures in the hopes of shaking up the shallow humdrum of the dating scene.

Originally airing on BBC3 in the UK, it seems Netflix has now taken over the show, bringing the bizarre concept worldwide.

Five contestants - one of one gender and four of the other - are taken to a house in California and chained together. Here the ‘Picker’ who has had their four matches selected for them based on a previous Q&A, is able to eliminate the ‘playmates’ one by one and choose to give them a share of the prize money.

Given that the host of the show is called the ‘lock keeper’ and the contestants are chained by the hands and feet 24 inches from each other this one actually sounds more like a ‘Saw’ adjacent horror flick. However, it did indeed run in the US for one season in 2001 after being adapted from Dutch TV.

you must see the end of the ep of this new dating show where the guy picks which woman is already in a relationship pic.twitter.com/TVBFVGTRAz

Achieving that most coveted of social media era prizes - a viral clip - this show sees female contestants attempting to trick a single man into believing they like him even though some of them are in relationships. At the close of each episode the male contestant lines up three suspicious characters he thinks might be ‘love traps,’ naming one who - if she is indeed a fake - falls through a trapdoor. Yes, that's right.

Since you’re not legally allowed to kill or maim contestants on reality TV (yet) this may well be the closest we’ll get to the dating format/blood sport crossover we all want. Here’s hoping the next season involves a catapult.

A Shot at Love with Tila Tequila

Relying on the novelty of erm, bisexuality, this show saw a selection of men and women compete for the affections of the titular Tila Tequila, whom presumably viewers were meant to recognise.

The series got a lot of heat from the Christians and right-wing media in the US lending it a certain progressive credence, however later revelations of anti-semitic and Hitler-praising Facebook posts by Tequila showed her in a different light.

A show which almost certainly got a boost from Netflix bingeing during lockdown was ‘Love is Blind’, the premise for which was that none of the contestants could see their prospective partners as they dated them. Don’t worry they’re all conventionally attractive anyway.

The show which brought us dating show household names like wine-drinking Jessica Batten and highly strung Amber Pike, saw contestants speaking to each other from ‘pods’ before agreeing to get engaged. They then had several weeks together before making it to the altar to either say ‘I do’ or ‘I don’t,’ resulting in unbelievable scenes.

While the second season was less favourably viewed and shock revelations were made on the season 1 follow up ‘After the Altar: Two Years Later,’ Love is Blind is sure to remain in the pantheon of dating shows for years to come.

Kardashians listen as prospective jurors criticise them ahead of trial