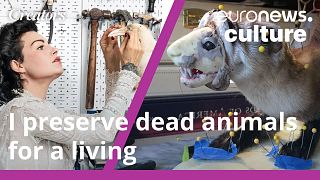 She may look like a glamourous 50s pin-up but Allis Markham is not a Hollywood star, she is an award-winning… taxidermist.

“Taxidermy literally breaks down to skin arranger. ‘Taxi’ is arrangement or movement. ‘Dermi’ is dermis. That's the skin. So I’m a skin arranger. But what it really means, practically, is that I take dead animals and I preserve them so that they look alive.”

Most of Markham’s clients are museums or nature centres. The specimens themselves come from a range of places, from deaths in zoos or parks to roadkill picked up by rangers.

“Unfortunately, everything that lives dies. When you have livestock, you get deadstock, eventually. And so the hope is with zoos, rehab centres, anything like that, that if they spent their life doing education, maybe that same specimen can spend its death in education as well.”

The process of preserving a dead animal does not involve any ‘stuffing’, as you may expect. The first stage is skinning the animal, removing all muscle and fat.

“It's just like taking off a hoodie, you're making an incision and then you're de-sleeving different areas,” says Markham.

The taxidermist must then make a sculpture, a replica, of the inside of the animal. Sort of like a mannequin which the preserved skin ‘hoodie’ then sits on.

“I can skin a mountain lion in a day, much less than that. But then to build that inner sculpture, that mannequin, I might do that multitasking over weeks and weeks. I'll work on that a bit. I'll work on this coyote. I'll go back to doing some birds."

The position and pose of the animal are carefully chosen, often, to reflect real behaviour.

“I always try to think with the pose that it is, in fact, a scene ... So I'm telling a story, but I want it to be an accurate story and I want it to be a beautiful story," says Markham, adding that there are three different decision-makers involved in the choice of the final scene.

“The first person is the client, the nature centre. What are they trying to show? What behaviours do they want this specimen to be doing? … The second person is me, what I think would look good aesthetically based on this specimen.

"And then really, the third person is the specimen. I mean, you wake up some days, you have a bad hair day. Birds have bad feather days, there are bad fur days. So you really have to decide based on looking at what you have to work with. So the specimen really decides that, too."

Allis Markham is very good at what she does, she competes in international taxidermy championships in the ‘Masters of Masters’ division and has come third in the world for her work on an African Jacana bird.

Her incredible skills, likeable personality and unique style have made her somewhat of an icon in her world. She now has more than 26,000 followers on Instagram, a sizeable community given the niche topic. On her account, she shares informative and behind-the-scenes posts of her work and sometimes even live streams as she works on her specimens, complete with warnings like: “This is not for the faint of heart."

“I'm trying to get people to look at what I'm doing differently, right? So when people hear about taxidermy, they think death. They think Norman Bates. There are all these preconceived notions," says Markham.

"Another thing people think when they think taxidermists, they think old white male and why there are many lovely old white men taxidermists that I know. We're not all that. There is a lot of growing diversity in taxidermy, and I'm proud to represent one segment of it.”

In this episode of Creators, a series where we get inside some of the world's top creative minds, Allis Markham gives us the ins and outs of taxidermy. For more on this story, watch the video in the media player above.