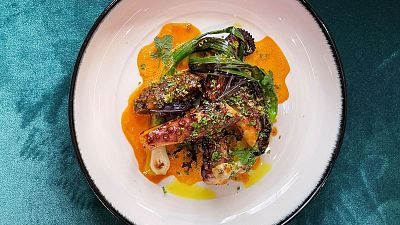 Fabios restaurant in Vienna is the brainchild of Fabio Giacobello.

His head chef, Christoph Brunnhuber, shares one of their star dishes with The Kitchen: roasted octopus with stewed aubergine and chorizo sauce.

Octopus is a fundamental component of Mediterranean cuisine and it is, hence, always part of our menu. The dish has become a staple at Fabios, and our kitchen crew regularly presents new interpretations. This one we share with you stands out by the combination of octopus and chorizo, which create a fine harmony.

**For the stewed **aubergine

For the chorizo and baby leeks sauce

**For the stewed **aubergine

For the chorizo and baby leeks sauce

Time to grill the octopus.

TIP: During winter, you can grill in the oven with the broiler function, or in a hot, cast-iron pan. For broiling, let the oven door slightly open while broiling to ensure that the heating will stay on continuously and you'll get a nice, even temperature.

Put a base of the stewed aubergine on a plate and place the grilled tentacles and baby leek on top. Finish off by adding the sauce around the dish, sprinkling the toasted breadcrumbs over it.

This is a fine and spicy wine, both complex and extremely harmonious on the palate. You will find elegant aromas of dark cherries, plums, blackberries and vanilla.

Michelin says of Fabios: "The Italian cuisine served in this fashionable city restaurant is just as modern and minimalist as the interior design – two equally good reasons to give it a try!"