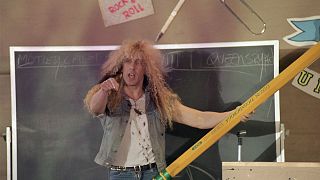 This is the mantra. It's the absolute rock n' roll answer to THE MAN. And it looks like Twisted Sister's 1984 smash is now directed at Vladimir Putin.

Snider, the lead vocalist of Hair Metal legends Twisted Sister, has given his blessing for the band's anthem to be used as a protest song for Ukrainians.

"I absolutely approve of Ukrainians using "We're Not Gonna Take It" as their battlecry. My grandfather was Ukrainian," he tweeted.

Metal is no stranger to protest. Black Sabbath's 1970 track 'War pigs' might be the most classic example of lyrics that pack a punch to the face of conflict.

It's hard to ignore the protest value of the Sex Pistols' 'Anarchy in the UK', and, later, Black Flag's 'Rise Above', and I'm putting Living Colour's 'Cult of Personality' right up there too. Metal almost seems tailor-made for protest.

Twisted Sister's 'We're not gonna take it' was released as a single on April 27, 1984, and featured on their 'Stay Hungry' album in the same year. The gold-selling single reached No. 21 in the US charts.

Ukraine has been under attack since February 24, when Russian President Vladimir Putin gave the order to invade. They have attacked Ukraine from all compass points other than the west.

Ukrainian and Russian opera stars in emotional embrace after a show

100,000 gather in Berlin as protests over Russia's invasion continue