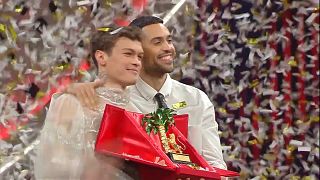 The annual Italian Sanremo Music Festival came to an end on Saturday with duo, Mahmood and Blanco, being crowned overall winners.

Their song 'Brividi', meaning 'Shivers', was always the bookmakers' favourite to win the competition.

The winner of Sanremo has the option to go to Eurovision and they later confirmed they will represent Italy at the Song Contest in Turin in May.

Of the 25 participating artists who started the five-night festival, only three made it to the Superfinal round.

One of those was Elisa with her song 'O Forse Sei Tu', 'or maybe it's you!"

Also reaching the Superfinal was former presenter of the event, Gianni Morandi, with his upbeat offering 'Apri Tutte le Porte'.

The veteran singer - who represented Italy at Eurovision in 1970 - came third in Saturday's Sanremo final.

Italy won the Eurovision Song Contest last year with Måneskin's 'Zitti e buoni' and therefore host the competition in May.