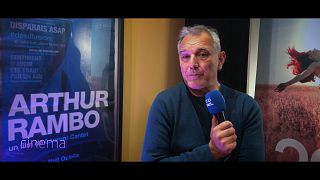 Drawing inspiration from reality to better understand contemporary society is one of French filmaker Laurent Cantet's trademarks - his latest film, 'Arthur Rambo', is no exception.

The story centres on the fictional character of Karim – a young writer from a deprived suburb of Paris, whom the media can’t get enough of. Soon, however, Karim's past catches up with him, after old hate-fuelled messages that he posted on social media as his pseudonym - Arthur Rambo - are dredged up.

"He chose this pseudonym, which for me is already the portrait of the character. There are both these literary ambitions, Arthur Rimbaud, and then there is Rambo, this anger, this violence... He’s really a mix of these two personalities," Cantet told Euronews.

...he knows very well that he doesn't belong in this new world which is very happy to welcome him.

Those almost contradictory facets of Karim's personality aim to broadly evoke the complexity of France. A country that on the one hand was hit by the terrorist attacks on Charlie Hebdo and the Bataclan, but also where young people from immigrant backgrounds frequently struggle to find a place in society.

"This status of social defector which these young people often have is a very fragile status. They have fought to become writers, for example in the case of Karim, the film’s hero. And at the same time he knows very well that he doesn't belong in this new world which is very happy to welcome him," Cantet explains.

I hope that the film speaks clearly about the responsibility of writing...

While the rise of Karim is meteoric, the fall from grace is equally so. But Cantet does not judge his central character. Neither a monster or victim, he is simply made to look back and take responsibility for his previous actions.

"I hope that the film speaks clearly about the responsibility of writing, whether it is the words he (Arthur Rambo) wrote that made him famous, but also in the tweets he writes in a few seconds. A word is never insignificant, and above all it is not erased, the internet has an infinite memory."

In 2008, Cantet won a Palme d’or at the Cannes Film Festival for The Class, a movie that explores the reality of a school classroom in a harsh Parisian suburb.

The film Arthur Rambo has just been released in France and Portugal and will hit the rest of Europe later this year.