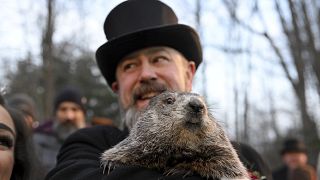 Groundhog Day, the US tradition where the seasons are predicted by a groundhog, was made world famous by the Bill Murray film of the same name.

But did you know the tradition's origins lie in Europe?

Every year spectators descend in their thousands on the town of Punxsutawney in Pennsylvania, US, to view the legendary Punxsutawney Phil make his prediction of the year's weather.

Folklore has it that if the celebrity rodent sees his shadow at daybreak and runs away, he is predicting that there will be six more weeks of winter. If there’s no shadow, there will be an early spring.

According to records, Phil has predicted winter more than 100 times.

In the US the annual event, which sparked the eponymous film and a Tony Award-nominated musical made by Tim Minchin, dates back to 1887.

However, it’s believed that the tradition itself was brought over by central European migrants.

Historians say that Groundhog Day has its origins in Candlemas, the Christian festival when candles are taken to church for a seasonal blessing.

In Germany the idea of clairvoyant rodents crept in, according to early retellings.

A diary entry from 1841 (predating the Punxsutawney tradition) by a storekeeper in Morgantown is one of the earliest records of groundhog weather prediction.

Kept safe by the Historical Society of Berks County in Reading, Pennsylvania, the handwritten note reads, "Last Tuesday, the 2nd, was Candlemas Day, the day on which, according to the Germans, the Groundhog peeps out of his winter quarters and if he sees his shadow he pops back for another six weeks' nap, but if the day be cloudy he remains out, as the weather is to be moderate."

Others say that the Dutch, at one time one of the largest settler groups in Pennsylvania, brought over the custom of weather-intuitive animals and used hedgehogs and badgers to predict the seasons.

The superstition was soon reoriented to groundhogs due to their large population in the midwestern state.

What about this year?

This year Punxsutawney Phil predicted half a dozen weeks of cold weather as he emerged from his burrow on February 2 to perform his Groundhog Day duties.

Admirers from the US and around the globe gathered at Gobbler's Knob as members of Punxsutawney Phil's "inner circle" summoned him from his tree stump at dawn to learn if he had seen his shadow.

The groundhog’s prediction was greeted by chants of "six more weeks!" by the rapturous crowd.

The return of the tradition is a relief for the town which lost out on tourism trade due to a COVID-related virtual event last year. On that occasion Phil announced an early spring to a crowd made of cardboard cut outs.