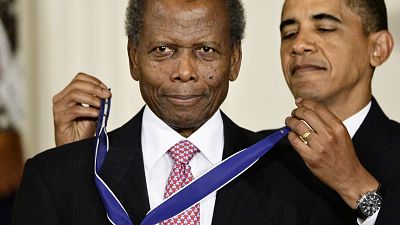 President Barack Obama presents the 2009 Presidential Medal of Freedom to Sidney Poitier during ceremonies in the East Room at the White House in Washington on, Aug. 12, 2009   -   Copyright  J. Scott Applewhite/AP
By Euronews  with AP  •  Updated: 07/01/2022

Sidney Poitier, the groundbreaking actor and enduring inspiration who transformed how Black people were portrayed on screen, became the first Black actor to win an Academy Award for best lead performance and the first to be a top box-office draw, has died. He was 94.

Poitier, winner of the best actor Oscar in 1964 for “Lilies of the Field,” died Thursday in the Bahamas, according to Eugene Torchon-Newry, acting director-general of the Ministry of Foreign Affairs in the Bahamas.

Deputy Prime Minister Chester Cooper made the announcement on Facebook, without mentioning the cause of death. The news was also confirmed by an official from the Bahamian Ministry of Foreign Affairs.

"We have lost an icon, a hero, a mentor, a fighter, and a national treasure," he said.

Few movie stars, Black or white, had such an influence both on and off the screen. Before Poitier, the son of Bahamian tomato farmers, no Black actor had a sustained career as a lead performer or could get a film produced based on his own star power. Before Poitier, few Black actors were permitted a break from the stereotypes of bug-eyed servants and grinning entertainers. Before Poitier, Hollywood filmmakers rarely even attempted to tell a Black person’s story.

Messages honoring and mourning Poitier flooded social media, with Whoopi Goldberg writing on Twitter: “He showed us how to reach for the stars.”

Writer, director and actor Tyler Perry took to Instagram to write: “The grace and class that this man has shown throughout his entire life, the example he set for me, not only as a Black man but as a human being will never be forgotten."

Poitier’s rise mirrored profound changes in the country in the 1950s and 1960s. As racial attitudes evolved during the civil rights era and segregation laws were challenged and fell, Poitier was the performer to whom a cautious industry turned for stories of progress.

He was the escaped Black convict who befriends a racist white prisoner (Tony Curtis) in “The Defiant Ones.” He was the courtly office worker who falls in love with a blind white girl in “A Patch of Blue.” He was the handyman in “Lilies of the Field” who builds a church for a group of nuns. In one of the great roles of the stage and screen, he was the ambitious young father whose dreams clashed with those of other family members in Lorraine Hansberry’s “A Raisin in the Sun.”

Debates about diversity in Hollywood inevitably turn to the story of Poitier. With his handsome, flawless face; intense stare and disciplined style, he was for years not just the most popular Black movie star, but the only one.

Poitier never pretended that his Oscar was “a magic wand” for Black performers, as he observed after his victory, and he shared his critics’ frustration with some of the roles he took on, confiding that his characters were sometimes so unsexual they became kind of “neuter.” But he also believed himself fortunate and encouraged those who followed him.

“To the young African American filmmakers who have arrived on the playing field, I am filled with pride you are here. I am sure, like me, you have discovered it was never impossible, it was just harder,” he said in 1992 as he received a lifetime achievement award from the American Film Institute. “

“Welcome, young Blacks. Those of us who go before you glance back with satisfaction and leave you with a simple trust: Be true to yourselves and be useful to the journey.”

Jamal Edwards: coroner concludes cause of death was drug-related