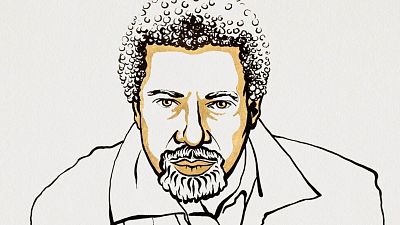 Abdulrazak Gurnah was awarded the Nobel Prize for Literature for his influence on postcolonial writing   -   Copyright  The Swedish Academy/Nobel Prize
By Shannon McDonagh  •  Updated: 08/10/2021

The Swedish Academy gathered today to present the award to the Zanzibar born, England-based writer “for his uncompromising and compassionate penetration of the effects of colonialism and the fate of the refugee in the gulf between cultures and continents."

Who is Abdulrazak Gurnah?

Abdulrazak Gurnah was born in 1948 on the island of Zanzibar, Africa. He emigrated to Britain as a student at the age of 20, and went on to become Professor and Director of Graduate studies at the University of Kent's Department of English after pursuing a PHD there at the age of 34.

Gurnah became renowned in the wider British academic community for his writings on culture and postcolonialism. Most notably, his novels Paradise, By the Sea, and Desertion. These titles have been shortlisted for honours such the Booker prize, the Whitbread Prize and the Los Angeles Times Book Award.

His literary endeavours are endless - Gurnah is also known for being contributing editor of Wasafiri magazine, a quarterly publication dedicated to international contemporary writing, from his home in Brighton, UK.

In 2018, his alma mater held an extensive talk honouring his contributions to contemporary postcolonial novelists writing in Britain today.

Who else was in the running for the Nobel Prize for Literature this year?

Though the nomination process is shrouded in secrecy with no discernible list of "nominees" made known to the public.

Other authors that were rumoured to be considered included: French memoirist Annie Ernaux, Ngũgĩ wa Thiong’o, one of modern Kenya's most prolific creative minds, Japanese author and essayist Haruki Murakami, and Canadian Margaret Atwood, one of our lifetime's literary best known literary superstars.

Gurnah is the 118th person to ever be awarded the prize. This composition is topped with 17 French winners, 13 Americans, and 11 British people.

Literature comes second to the Nobel Peace Prize for awarding women - 16 have been honoured in the 120 years the prize has been active.

How is the winner of the Nobel Prize for Literature selected?

Over 3,000 members of the Nobel Committee are sent nomination forms a year ahead of the awards.

This committee consists of members of national assemblies, governments, professors, and previous Nobel Prize winners, to name a few.

From this, around 300 names are added into the mix that are not made known to the public. Each person shortlisted for the six awards: Physics, Chemistry, Physiology or Medicine, Literature, and Peace, is not told about it.

There is a prize awarding institution for each award. In the case of the Literature Prize, this is the Swedish Academy, who go on to meet and vote on prospective winners.

The decision is announced straight after the vote, with no option to debate or appeal it.

How much will Abdulrazak Gurnah win in prize money and where from?

The award money is sourced through the estate of Alfred Nobel, the Swedish chemist and inventor responsible for creating the prize in his will in 1895.

His estate is treated as an investment fund that puts his money into things like real estate and equities with the goal of getting a return of 3.5 per cent on the investments and distributing that across the six prizes.